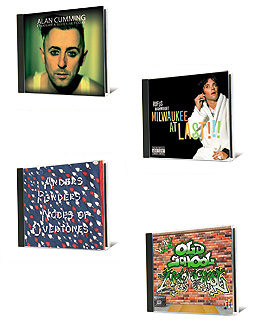 Call it a victory lap. Rufus Wainwright has been riding high for several years—politically, personally, and professionally. This 10-track disc (or a longer DVD version for those who like visuals) captures Wainwright during his 2007 tour, backed by his full band, and full of all the drama you’d expect. It’s a solid setlist. The performances are fine throughout—such as the 13-minute “Not Ready to Love/Slideshow,” where he wrings every last drop of hurt and longing out of the two songs. Other highlights are here as well, from a turn at Noel Coward’s “If Love Were All” to a final triumphant reading of “Gay Messiah.” Still, the set suffers the same problem as most live collections—the recordings aren’t as fresh as the originals, and really don’t replicate the “being there” aspect. Unlike Wainwright’s first live foray, Rufus Does Judy at Carnegie Hall, not enough unique moments are here to make it any more than a fun keepsake.

Popular music is mainly a guitar- and piano-driven world, which is one of the reasons any artist who creates outside of that paradigm instantly sounds so fresh. Rising local Anders Ponders (the stage name of Anders Mattson) makes his music on the viola—the bigger, bolder cousin of the violin. It’s not surprising that strings are all over his debut, but the way they’re employed makes for whimsical tunes not out of place on a Flaming Lips or Magnetic Fields album. To this, Ponders adds his own off-kilter stories and lyrics, all of which is wrapped up in a voice that, while not particularly strong, has not just a ton of warmth, but is perfect for these kinds of epic pieces of left-field folk music. Nodes of Overtones is a grand debut that is tuneful, infectious, and above all a lot of fun for the listener. Ponders will perform a release party show November 7 at Bedlam Theatre.

Of all the things that hip-hop has changed about music, one of the more interesting is the fluid nature of the creator. Songs often are built from found snatches of rhythm, beats, or even oddball samples. In the hands of a top DJ, familiar songs can be given a brand-new life, especially when a skilled rapper is at the mike. Local lesbian artist Alicia Leafgreen takes this idea a step further on her new download-only mixtape, Old School vs. New School. She starts with the instrumental tracks of 16 existing hip-hop tunes, and adds her own verses, making a kind of Version 1.1 of the tracks. She has picked a number of hot tracks here, and her additions are fun, delving into issues closer to heart than the originals. As a full-priced disc, an experiment like this probably would bring complaints. As a free download, it’s a ton of fun. Visit Leafgreen’s site at www.myspace.com/whitelesbianrapper.