Here With Me
Holly Williams

The latest in the family’s country-music dynasty, Holly Williams displays the same set of skills that the famous men of her clan have shown through the decades: musical passion, a deft touch while singing, and an ability to sing about sorrow without getting maudlin. On her debut, she showcases all this on a tight, 11-song collection. Penning most of the songs herself, she runs through plenty of familiar territory: heartbreak, heartbreak, and some extra heartbreak, with a bit of Jesus thrown in (“Without Jesus Here With Me,” about a devastating car wreck she and her sister were in a few years ago that they barely survived). Sometimes, the music is a bit too slick, trading the heart of traditional country for the less-interesting realm of pop. She ends it all with a striking cover of Neil Young’s “Birds,” a good fit for Williams, showcasing her solid voice and, more importantly, deep understanding of the song. 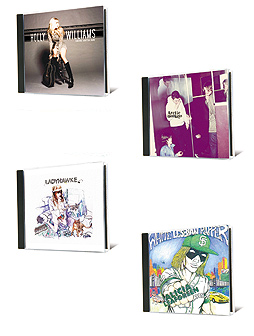 When Arctic Monkeys burst on the scene a few years ago, I absolutely hated them. The Sheffield band arrived with tons of hype, but to my ears, they just were aping Oasis, without actually going back and listening to all the acts that group was, ahem, inspired by for their tunes. Something strange happened on Arctic Monkeys’s way to the scrap heap, however. The tunes got more interesting, and the lyrics—mainly about life away from the limelight in working-class England—came into sharper focus. The band’s third album continues that trend, sporting a tougher, classic rock sound that offers a looser backdrop for singer Alex Turner’s stories. The songs are infused with additional influences, such as the bossa nova beat on opener “My Propeller” that shows additional growth. The band still hangs onto a few too many coattails—first single “Cry Lighting” could be a Franz Ferdinand outtake—but it’s fresh enough to stay on
the radar.

Ah, more music that sounds like the past. The folks in Ladyhawke—led by New Zealander Pip Brown—sound like a mix of Blondie and New Order, with the mixed results you might expect from such a combination. On the upside, the band certainly recreates the musical vibe of the era, as the tunes are loaded with vintage synths and catchy popcraft that defined the time. The bouncy and fun tunes would be great for dancing (skinny tie optional). On the downside, they don’t bring enough fresh good to the party to separate themselves from the pack. The trouble here—as with any retro outfit—is that I can still listen to vintage Blondie and New Order. Through this 17-song collection, enough highlights keep the listener’s attention, and a trio of acoustic tracks (bonus cuts for the US release) do a fine job of showing off the band’s real chops.

Local hip-hop artist Alicia Leafgreen certainly doesn’t pull any punches here, on her debut EP from earlier in the year. She keeps her messages clear, be it looking for the ladies (a good chunk of the songs here), or trying to make a broader statement about love and peace (“A.D.I.D.A.S.”). The music has a spare, 1980s vibe to it—perhaps not surprising, as the legendary Dr. Fink (look at your early Prince records…he’s the guy in scrubs) produced the six-song effort. All this gives the collection a definite electro vibe à la Peaches. And believe me, nothing’s wrong in bringing Peaches to mind in your music. That comes into focus on the pulsating epic “I Got My Sawwed Off.” Leafgreen’s dedication to old school doesn’t end with this EP. She plans to issue a free mix tape via <www.myspace.com/whitelesbianrapper> in the near future, where she’ll rap over classic hip-hop instrumentals by the likes of Public Enemy.