Sometimes, it’s worth waiting before forming an opinion. While this album has been lurking on my hard drive for a couple of months, I really didn’t give it a listen until a couple of the tracks bore their way into my brain via repeated airings on the radio. The band’s ragged postpunk sound has been done by many groups in recent years, but it’s Eddie Argos’s lyrics that really seal the deal. He’s a wry commentator on everyday life—a more shouty end of a long-standing British tradition. Art Brut also celebrates some distinctly geeky joys. As someone who has haunted used music stores for decades, I absolutely understand the pleasures detailed in “The Replacements,” where the singer is amazed finally to hear the signature Minneapolis band after finding a disc in a secondhand shop. And “DC Comics and Chocolate Milk” could have been drawn from my own youth, as I always preferred the second-place superheroes. 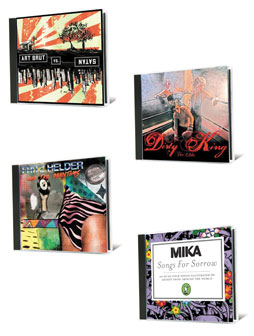 While this band may get attention for postop transsexual leader Lucas Silveira (pictured shirtless on the cover—if you look closely, you can see the scars), rock music fans should give it a whirl for The Cliks’s tough and impassioned playing. Silveira—who sounds an awful lot like Gwen Stefani—reaches into the rock playbook for a collection of tunes about betrayal and lost love. From the opening “Haunted,” it’s clear that the trio has a tough ride in store for the listener, as the singer leaves behind a faithful love for the unknown. Silveira makes it all clear on “Not Your Boy”: “The only thing inside I can see/Is in the lie that tells me I’ve been dreaming.” Ouch. And it doesn’t get any easier on the back half of the record, where the band runs through “Career Suicide”; “We Are the Wolverines”; and the closer, “Animal Farm.” Dirty King leaves you spent, exhausted, and ready to listen again.

Cheeky title aside, this Canadian combo does a fine job in bringing the goods. The quartet obviously loves to party and make people dance (e.g., “Making a Scene” and “All Over the Place”). Later on, things settle down to the nitty-gritty, such as the cold techno of “Sex Robot” and the driving punk of “Punch Me in the Neck.” It has plenty of camp—one of the players is holding a keytar, for heaven’s sake—but also a lot of deep love for the varied musical styles, from straight-up disco to electro-funk to more obscure sounds. Some hitches creep in along the way. The album has far too many interludes that do little more than just interrupt the fun, and it ends with a couple of remixes that do little more than pad out the album length. In between all that, however, is a core of tunes that will do plenty to pack any stylish dance floor.

Mika follows up Life in Cartoon Motion with this delightful confection of an EP. The minialbum seemed to have been a lost art, but the ascendancy of digital distribution gives artists a reason to put out a handful of tracks at a time. This not only keeps them in the public eye, but also takes some pressure off having to craft a dozen or more new songs at a time. Per the title, Songs for Sorrow is a slightly darker set than Cartoon Motion, but the singer’s skills are still in full effect. In fact, he moves a bit out of the Freddie Mercury shadow this time around, and begins to forge a more distinct identity. Sure, it the jolly “Toy Boy” is there, but that’s just a counterpoint to the rest of the set, especially “Lady Jane,” which moves Mika more into Rufus Wainwright territory. No matter the influence, it’s worth a listen—and you can hear three/fourths of it at www.mikasounds.com.