Crossing the Rubicon
The Sounds

On Cross the Rubicon, The Sounds build off the music they crafted on 2006’s Dying to Say This to You. The Swedish five-piece loves their 1980s new-wavish rock ’n’ roll, but on their third album, they prove to be more than just slaves to the sound. Fueled by a driving backbeat, and nifty guitar and synth interplay, the group announce their manifesto on album opener “No One Sleeps When I’m Awake.” Leading it all, however, is Maja Ivarsson’s crystal-clear voice that mixes enough pretty to be pleasing pop, but also has enough grit to help the songs stick in the head. This comes clear when the band looks back wistfully to the past (for them, that’s around 1999) on tunes like “Underground” and the title track. In the end, this is the kind of album made for sharing via open car windows on hot sunny days. 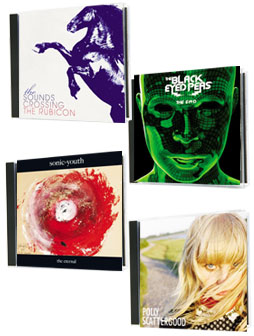 The E.N.D. (The EnergyNever dies)
The Black Eyed Peas

The Energy Never Dies, the booklet for the latest Black Eyed Peas album, promises—or threatens, depending on your opinion of Fergie, nonholographic will.i.am, and crew. Throughout The E.N.D., the quartet gamely try to bring the funk, with varying results. The group is best when just laying down the dancing grooves, and letting go from there. Listening to this off the dance floor, however, isn’t particularly rewarding. Even with tons of autotuning, no one here is much of a singer. And the rapping…well, it reminds me more of M.C. Hammer than some state-of-the-art hip-hop—which doesn’t mean that The E.N.D. is completely devoid of merits. Some of the tunes provide chances for dance floor grooves, even if the songs that surround them are…ahem…a bit stupid. With a bit of pruning, the best of The E.N.D. could find its way onto a mix tape. The rest—well, that energy certainly could go ahead and die.

It’s tough to remain avant-garde after three decades in the game, but the folks in Sonic Youth gamely try, year after year, album after album. The Eternal marks a return of sorts for the band, as it is their first on an indie label since 1988’s Daydream Nation. This one isn’t as good as that album (few indie rock releases are), but The Eternal is a good sight better than their last handful of Geffen releases. They do this via an often-overlooked part of their sound: tuneful songs (tuneful in their signature tuning, of course). Thurston Moore’s soft voice always has given his songs an otherworldly quality, while Kim Gordon’s more grounded voice often has brought the band back to earth. You can hear that dynamic throughout, plus even a few harmonies(!) tossed in for effect. In the end, it’s about the guitars, of course. Moore, Gordon, and Lee Ranaldo rock likes it’s 1989.

Across the pond, new artists eternally are being groomed as the “next big thing.” You can add Polly Scattergood to that ever-growing pile. Her self-titled debut touches on decades of strong but ethereal women singers. Think of Kate Bush, the mellower P.J. Harvey, and (quite strongly) Tori Amos. To Scattergood’s credit, she has a beguiling voice that is well-served by the 10 songs on the collection. Her weakness is as a songwriter. “I am strong/I am not weak” and “Time takes many tears away” aren’t anything to write home about. Her attempts to sound fierce—the whole of “Bunny Club”—come off sounding like a Lily Allen wannabe. However, flashes of a greater talent are here. Album opener and current single “I Hate the Way” shows more life, in the way the song builds from quiet to powerful, along with more verve in the lyrics. Here, Scattergood sounds like the masters instead of another artist for the heap.