When we last left Green Day, the Berkeley punk-rock trio just had finished surprising the hell out of everyone by going all Who on us, issuing the sprawling American Idiot. Buoyed by epic rockers and the affecting “Wake Me When September Ends,” the band suddenly became important again. On the follow-up, Green Day goes back to the same well with strong, if not as brilliant, results. 21st Century Breakdown plays with some of the same themes (pretty much summed up by the album title), and the same astonishing musical confidence, but it’s really a matter of lightning striking twice. That doesn’t prevent this from being one of the top pure rocking albums of the year. And the band moves on a bit with their British idolatry, producing a number of Kinks-like poppers amid all the brash and noise. Still, it doesn’t take long for the acoustic guitars in “Before the Lobotomy” to give way to Green Day’s signature sound. 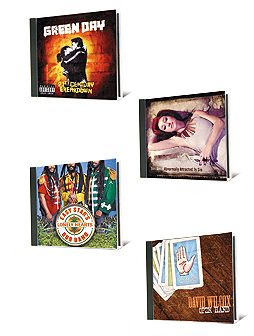 For her 10th studio album, Tori Amos returned to the fold, so to speak. A new record deal reunited her with Doug Morris, who led her breakout in the early 1990s. Abnormally Attracted to Sin isn’t exactly Boys For Pele II, but it does find Amos in a more focused mode than on some recent albums. Her longtime exploration of outsiders, and the often-contradictory expectations of girls and women, make for the best music here, such as “Ophelia,” a waltz-like look at the pain that leads to cutting. Working with her longtime touring band, Amos crafts plenty of tight musical moments throughout the collection, even rocking out on occasion. Of course, focused means something different for her than most. The album drags on for 17 tracks, slowly exhausting the listener’s good will. Some of the odd turns are absolute dead ends, while other tracks just don’t cut it. In the end, this is a case where less is definitely more.

After taking on Radiohead and Pink Floyd’s Dark Side of the Moon, Easy Star All Stars have turned their bloodshot eyes to the biggest rock act of all time on their latest, Easy Star’s Lonely Hearts Dub Band. Yep, if you’ve been dying to hear the likes of “For the Benefit of Mr. Kite” done à la reggae, here’s your chance. It may sound awful to purists, but this collective knows its stuff, and has had enough practice to keep the spirit of the music alive, even when giving it a funky beat (unlike, say, Dread Zeppelin). It also helps that Sgt. Pepper, for all the ink it has received through the years, has more than a few clunkers on it. Making “Within You, Without You” actually listenable is a pretty amazing feat. The band falters on the album’s best tunes—best to skip “A Day in the Life” altogether. But some bonus dubs keep the party going.

Amid the annual American Idol hullabaloo, it’s good to be reminded of what life is like for the vast majority of creative music folks. David Wilcox laid down the tracks on his new disc in a week, working with a trio of musicians who played the tune almost exclusively live. That honest approach appears in the music as well. Wilcox may be a folky singer-songwriter, but he avoids being preachy to produce good old-fashioned storytelling instead. He shows the goods on a tune like “Winter on the Shore,” which brings the chill of the season and the warmth of being close to another on even the hottest day of summer. Even a song like “Captain Wanker,” about—to use the American term—a complete asshole, gets inside the mind of the titular character, as unpleasant as that may be. Open Hand probably won’t earn Wilcox a spot on a reality show, but this is the sound of a real American Idol.