Since unleashing “Fuck the Pain Away” in 2000, Peaches has inspired a generation of musicians with her homemade aesthetic. Now, the genderbending Canadian songstress returns with another collection of spare, driving dance anthems. I Feel Cream doesn’t break any new ground for Peaches. Instead, it provides another 45-minute slice of throbbing funk to inspire your libido to…well, whatever it wants to do. Honestly, Prince—the Dirty Mind Prince, mind you—only wishes he were ever as horny as Peaches is on “Billionaire.” “Talk to Me” takes Peaches into a more pop direction—OK, it marries her typical electronic pulse to some heavy-duty soul. And the singer who named an earlier album Fatherfucker gets back into the groove with “Mommy Complex.” Really, the only flaw with I Feel Cream is that it is just more of the same. Then again, many greats have made great music doing just that. Peaches can join that list. 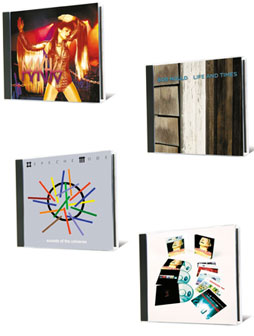 It seems like only yesterday—instead of 20 years—that former Minnesotan/Hüsker Dü guitarist Bob Mould caused controversy in the indie scene by featuring acoustic guitars and (gasp!) strings on his first solo disc, Workbook. Since then, the album has emerged as a modern-rock classic, while Mould has gone on to explore plenty of different sounds. On Life and Times, he revisits some of the vibe—if not the same sound—of that classic album. The older, wiser, and less bitter Mould makes great music on this tight, 10-track album, applying his many strengths, from engaging melodies to intense playing to honest and insightful lyrics. While you won’t find anything as experimental as the electronic Modulate here, you can hear the lessons learned from that and other albums on songs like “Lifetime.” Still, it is the pure pop pleasures of tracks like “City Lights” and “MM 17” that make this album a winner.

Sounds of the Universe

Lots of bands soldier on well beyond their glory days. State fairs and outdoor festivals are packed with the likes of Molly Hatchet and ’80s package shows. Sometimes, bands defy the expectations, making late-career comebacks—which brings me to Depeche Mode, and their latest, Sounds of the Universe. Channeling the spirit that drove them in their late-1980s heyday, and learning a few lessons from newer sounds, the band makes their most compelling music since the Violator/Songs of Faith of Devotion heyday. Part of the credit can go to singer Dave Gahen, who performs with plenty of emotion and verve throughout the album. The rest can be laid at the feet of songwriter Martin Gore, who creates songs that instantly can be identified as by Depeche Mode, but have the freshness needed to make the album more than a retread. Sounds of the Universe brings back a time we all thought was gone.

With Radiohead’s Reissues, I’m starting to feel my years. They were my favorite band of the 1990s, and these multi-CD/DVD packages prove that time is now firmly in the past. Oh, well, at least there’s still the music. Most considered the band a one-hit wonder after “Creep” came out, and little on Pablo Honey will convince you otherwise. The band really found its groove on The Bends, which unleashed the likes of “Fake Plastic Trees,” “Black Star,” and the stunning “High and Dry.” From there, the band hit its (still) apex, OK Computer. Over a dozen tracks, Radiohead defined the malaise of life in the ’90s, and produced an enduring classic. This trio of reissues props up each set with a bonus disc of B-sides, demos and live tracks, and plenty of videos and live footage. The various B-sides are essential, and the rest is worth a watch/listen.