Rock ’n’ roll is old enough now to have numerous dead ends, lost legends, and should-have-been greats. That’s especially true in the predigital recording age, when bands actually needed to put together some scratch to make recordings, and had few avenues to release their music apart from labels. In the mid-1970s, a trio of African-American Detroit musicians turned up the anger, and channeled their soul-influenced music to something that presaged punk. Lost for decades, Death’s only recordings (a scant seven songs) finally have been released. The group bridged the gap from Motor City madmen the Stooges and the MC5 to the first wave of full-fledged punk rockers. While musically more accomplished than the first wave of punk rockers, these songs, such as “Politicians in my Eyes,” burn with just as much intensity as a thousand all-ages shows. 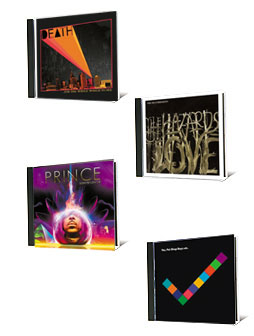 Oh, Colin Meloy, what have you wrought this time? Portland’s finest chamber pop/sea shanty/hard rocking/book club heads into the deep end on The Hazards of Love, a 17-song concept album about…well, the hazards of love, I would guess. It’s not as if the band isn’t used to pushing the boundary between literary and pretentious (an earlier EP, The Tain, is a single 17-minute song). No matter the higher desires, the Decemberists still know how to craft a fine tune. In this case, those tunes are sometimes hard to find amid the repeating musical motifs that bind the concept together. It involves a pregnant girl, a shape-shifter, and a forest queen—kind of like a Peter Gabriel-led Genesis album, then. Still, when it all comes together, such as the single “The Rake’s Song,” it’s a pretty amazing ride.

You can look at Prince’s new Target-only, three-album set two ways. At one level, only one of the discs, the old-school funky MPLSoUND, is truly worth the price of admission, but because the entire package retails for $11.95, the overall value doesn’t go down much. The titular album finds Prince in pure eccentric mode, laying out off-kilter pop tunes that remind you of past greats, but never come close to those earlier levels. It’s not that the album is terrible—Prince is too talented for that—but it isn’t as much fun as MPLSoUND, where the Prince of Controversy/Dirty Mind seems to reign supreme. Finally, the package includes Exiler, an album by Prince’s latest protégé, Bria Valente. Like the ones from the past, you pretty much can ignore this part of the collection.

Like many other groups that have entered musical middle age, Neil Tennant and Chris Lowe of the Pet Shop Boys know what kind of music they are best at producing, and do their damnedest to fulfill those expectations. So, the question isn’t whether Yes breaks new ground—you already know the answer—but if it holds to the same standard as the duo’s albums of the past. At that level, it certainly does. Over 11 cuts, the duo plies their familiar formula—dancy electronic beats and moody vocals—to fine effect. While album opener (and first single) “Love etc.” gets proceedings off to a slightly slow start, the band quickly finds its groove, leading up to a number of sparkling tunes at album end, including closers “The Way it Used to Be” and “Legacy.”