For those of us of a certain age, Annie Lennox always will be the fist-pumping, dapper-suit-wearing front woman in the Eurythmics. However, she has had a fine solo career over the last two decades, one that often has outstripped her work with Dave Stewart. Collection brings together the highlights of Lennox’s solo career. It’s an engaging ride from beginning to end, featuring an artist who hasn’t lost any of her strengths, even as she explores new sounds and styles along the way. In addition, to close out the collection, she has recorded a pair of covers (by British rockers Ash and Keane, no less) that connect her to the latest generation of artists. 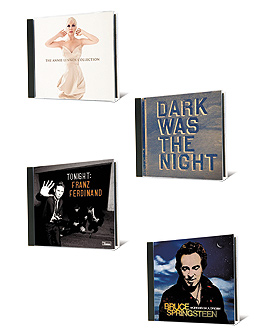 Dark Was the Night
Various Artists

The latest Red Hot benefit disc (the 20th in the series for the AIDS/HIV organization) also serves as a neat survey of current indie rock. These 31 tracks spread over two discs showcase plenty of big names (relatively speaking) and some interesting combinations. The key question, of course: Is it good music? For the most part, the answer is yes. Any compilation will have its dogs, but these tracks showcase considerable talent. Heavily tipped artists, such as the Decembrists, the Arcade Fire, Andrew Bird, and Cat Power, make fine contributions, while a string of interesting collaborations (starting with the opening mixture of experimental New Yorkers Dirty Projectors and David Byrne) help move the collection along.

On album number three, these Brits move from disco-tinged post-post-punk to something pretty much disco. The bouncy, driving rhythms of most of Tonight fit the concept, as the album loosely brings an evening of clubbing to life. But too much of Tonight feels like a watered-down retread of the band’s supremely fun first two albums. It has some highlights, including the epic end of the evening, “Lucid Dreams.” The song not only includes the climax of a hot night out, but also features a brilliant “come down,” as the music twists, turns, and slows down to an electronic crawl. It’s the kind of song that indicates what the band can do if it just tries a little more.

Working on a Dream
Bruce Springsteen

The suddenly prolific Boss takes a fascinating turn on his latest collection. In place of the epic, hard-bitten tales of his early work, or the mature love and relationship songs of recent vintage, he has gone back to his 1960s roots. He has pieced together a collection of classic-sounding pop songs that show a love for the Beach Boys, the Beatles, and Bob Dylan. The album hits its heights on the last two cuts. “The Last Carnival,” an elegy to late E-Street keyboardist Danny Federici, evokes the mood of Springsteen’s earliest albums. “The Wrestler,” the latest in a long line of intriguing movie tunes, brings all the worn-down heartache of the title character to life.