Las Vegas’s happiest rockers return for another round, taking yet another step back into the glittering past of bouncy dance rock. The band certainly knows a hook when they hear it, and their evocation of mid-1980s Cure and New Order is uncanny. It’s far from the deepest album I’ve heard in recent months, but the music moves without feeling absolutely artificial. In general, I find myself favoring the New Order-y tracks to the Cure-like ones (that’s how I prefer the originals), and the occasional stab at moodiness doesn’t do the Killers very well. But when this album hits it, such as the driving “Spaceman,” you have a perfect 21st-Century rocking dance tune. 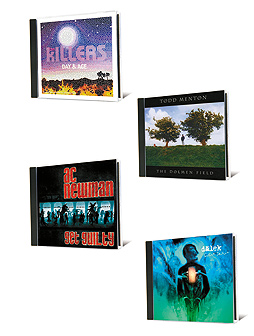 Todd Menton steps aside from Boiled in Lead for his latest solo release, but the music here isn’t far from that act’s delicious hybrid of various folk and rock styles. Employing an intriguing cast of supporting players (including local percussive combo Savage Aural Hotbed), he twists familiar Gaelic forms into something unique. Mixing traditional pieces and a handful of excellent originals, he brings a world that is gone/perhaps never existed to the ears. It’s the delicate originals that grab the most, including the fantastic “Damselfly,” which not only is a perfect song for a snowy Minnesota winter, but also packs several layers of heartbreak. Between The Dolmen Field and Boiled in Lead’s recent Silver, it has been a good musical year for Menton.

As the leader of The New Pornographers, A.C. Newman has been responsible for some of the best pure rock and pop music of the decade, so it’s no surprise that his solo discs carry the same quality. On Get Guilty, he makes music that is as engaging, bouncy and instantly memorable as the best pop crafters of the rock era. Think of classic Kinks passed through a modern rock filter, with stops along the way for a bevy of other influences. Above all, Newman is a modern master of the hook, crafting pieces of music that will stick in the brain for days. Listen to opening single “The Palace at 4 A.M.” or closer “All of My Days & All of My Days Off” for prime examples.

The latest album from this New York alternative hip-hop act is the perfect sound track for our times: harsh, dissonant—and, above all, loaded with fury. Dälek (pronounced “dialect”) isn’t at all interested in the usual trappings of hip-hop, so no paeans to expensive goods, easy sex, or how awful all the other rappers are. Instead, this collection is loaded with images of the dispossessed, the lost, and the forgotten. All this is laid to backbeats that have more to do with dirges than bouncy tunes intended to pack the dance floor. It won’t be the biggest hit of 2009, but Gutter Tactics may be the most honest (if difficult) album of the year.