Notes on the Conventions

I did not watch any of the Democratic or Republican conventions. Nothing important gets decided at conventions nowadays, so how can anyone care? Mostly, conventions are spectacle and show (with bands, demonstrations, and the occasional balloon drop), designed to excite the party faithful. 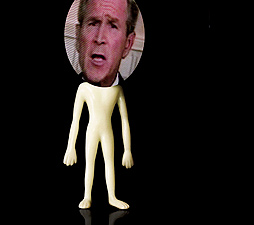 Because candidates generally get a brief postconvention “bounce” in opinion polls, that is said to work. But it doesn’t last.

Then, too, I no longer can stand political rhetoric. It is diffuse, phrased in glittering generalities designed largely to mean whatever listeners want them to mean.

“Change” was the big word this year—different kinds of change depending on the candidate, I suppose, but change nonetheless. But changing Washington in any significant way is like trying to turn around an aircraft carrier.

Thousands upon thousands of bureaucrats, lobbyists, and legislators on the take have a vested interest in change not happening.

The one change we definitely will get is the one I most want: a President I don’t have to be embarrassed by.

I cannot stand to watch or listen to George W. Bush. This has nothing to do with his policies. But he cannot talk, and he cannot read. He has no feel for the natural rhythms of the English language. He moves awkwardly, as if an alien had invaded his body, and were trying to learn how to operate it. He sometimes acts like a frat boy, and says stupid and naive things like how he peered into Putin’s very soul.

How can any national leader take Bush seriously? Either John McCain or Barack Obama would be a vast improvement.

Neither vice presidential pick is impressive.

After decades in the Senate, Joe Biden is still best-known for appropriating a speech from British Labor Party leader Neil Kinnock. Biden seems to have been a fine example of the old ways in Washington that Obama promises to change. Nor does being a senator necessarily give you experience it would be good for Obama to have.

McCain’s choice, Sarah Palin, seems to be a garden-variety Religious Right advocate, bent on mixing her particular religion and government policy. We still are learning about her, but we already know a few things. Her evangelical church just promoted one of those “ex-gay” programs to cure homosexuals. And, apparently, she sought to have a librarian remove from the library certain books she did not approve of.

Unlike “right-to-life” advocates, I am not favorably impressed by Palin’s “courageous” decision to keep a fetus with diagnosed Down syndrome. She did that infant no favors. He is likely to have at most an IQ of about 50, and always will require someone to take care of him. Our brain is what makes us human, so he never will know what it is like to live a fully human life. And he always will be vaguely aware that other people are far more capable than he is. What a sad way to exist.

In an apparently authentic online self-description, now deleted, the boyfriend of Palin’s pregnant daughter, Bristol, said he did not want children. Surprise! You have unprotected sex—you end up with fetuses. Assuming the Palins instructed their children on the importance of abstinence, this tells us about the effectiveness of abstinence education. It does not work. And for all we know, the father and his parents wanted Bristol to have an abortion, but the Palins would not let her. Because the man has to pay for the high costs of a child’s upbringing, women should not get 100 percent of the decision about abortion.

A few upper-echelon Republican functionaries spoke to the gay Log Cabin Republican people. They are probably delighted. I’m not. I admire gay Republicans for doggedly hanging in there against all evidence. But the party is just covering all its bases of financial support.

Where are affirmative words from McCain or Palin about military access, AIDS research, or domestic partner policies? What do gay Republicans get for their money?

“Access” is meaningless if it has no results in policy. All such access provides is ego-stroking. You would think Log Cabin Republicans would have learned something from the experience of gay Democrats who got nothing in the last session of Congress, or from the group’s own meeting with Bush in 2000.

No doubt, most gay voters will vote on the basis of their preferences on nongay issues. Republican voters pretty much have to, and Democratic voters will talk a good line about gay issues, but generally agree with the Democrats on other issues as well, and would vote Democratic even if gay issues were absent.