I first met Tami Cabrera, owner of Muddy Paws Cheesecake, in November 2005. We both were setting up our display tables at the Calhoun Coffee Festival. My first cookbook had just been released. I had baked several items from my new book to display, including my Chocolate Truffle Cheesecake. 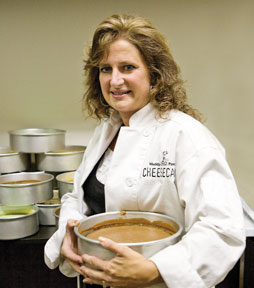 Once we had completed setup, my partner, Chad, and I walked around to see the other vendors. That’s when I encountered Cabrera. She had a cornucopia of cheesecakes covering a beautiful tablecloth, with antique cake plates holding some of the most exquisite and unique creations I ever had beheld. She was extremely busy, but immediately smiled, introduced herself, and asked if we wanted to try some samples. We have been friends ever since.

When I recently visited Cabrera’s new location in St. Louis Park, she told me that she has been spending a good deal of her time focusing on weddings, unions, and anniversaries. With Iowa having legalized same-sex marriage, Minnesota shouldn’t be too far behind. Now, Chad, I know a place for unbelievable GLBT wedding cheesecakes!

When I arrived for our chat, Cabrera and her assistant, Amy, had just baked a ton of cheesecakes.

Cabrera told me, “Our ovens can bake up to 28 cheesecakes at a time. Our bake days are Tuesday, Thursday, Friday, and Saturday. The opposite days are cutting days. The cutting of our cheesecakes actually takes as long as the baking.”

As we walked into the Bridal Consulting room, I noticed a wall covered with accolades that Cabrera and Muddy Paws Cheesecake had received through the years. The one that stood out was a visit from Al Roker of the Today Show and the Food Network.

As Cabrera recounts, “On November 18, 2003, NBC weatherman Al Roker dispatched his Food Network Roker on the Road film crew to our St. Paul, Minnesota, kitchens. Upon their arrival, I welcomed them, and spent the next 10 hours creating from scratch—just as we always do—14 of our most indulgent cheesecake flavors, including Blueberry Cranberry Pistachio, Coconut Mango, Banana Split, Black Forest, and Crazy Carrot. And with the cakes baking safely in the ovens, I went on to design one of my signature wedding cakes: a Three-Tier Raspberry Swirl Cheesecake with Lady Fingers, Ribbon, and Fresh Raspberries.”

Cabrera began her cheesecake venture while working for an architecture firm back in 1994. It had 60 employees, and she would bring her homemade cheesecakes to the office for testing. The orders started pouring in, and she incorporated the business in 1999.

The first Muddy Paws Cheesecake was on North Snelling Avenue in St. Paul. A second shop eventually opened in Maple Grove. Then, Cabrera and company decided to make a large jump to a retail restaurant on Hennepin Avenue in Uptown Minneapolis.

Cabrera explains, “But due to the economic climate, taking care of a special-needs child, and my sincere desire to focus on our wedding business, we decided to close the Hennepin location, and move to our current surroundings in St. Louis Park. Now, I can focus on our wedding and GLBT union production, plus our online ordering trade. It was the right move.”
Cabrera and I looked through the Muddy Paws wedding books filled with photographs of the most extraordinary cheesecakes I ever have seen.

According to Cabrera, “All these cheesecakes are from scratch. They are Chicago/New York-style, made with cream cheese, eggs, vanilla, and cream. I haven’t given into mass production, or using fillers such as adding flour to make them look bigger. There are no additives either—pure cheesecake.”

Muddy Paws also offers cheesecake with sauces, so guests can top their own. It provides 13 different sauces to enhance your cheesecake experience.

If you intend to serve cheesecake rather than regular cake at your wedding or union, Cabrera recommends contacting Muddy Paws at least six months out to help you plan. For made-to-order cheesecakes, let the shop know at least 10 days out.

Cabrera remarks, “We’re the only cheesecake bakery that offers that service that let’s you create your own flavor.”

You can order online, and have your cheesecake delivered anywhere in the nation. Muddy Paws also offers a delivery service within the Twin Cities.

When I asked Cabrera what she would like Lavender readers to know about Muddy Paws, she replied, “We’re locally owned and female-owned.”

So, for the best cheesecake experience of your life, check out Muddy Paws. Stop in, and pick a couple up from the list of 222 flavors, check it out online, or call to plan your special day.
As Cabrera puts it, “Life is short. Eat cheesecake!”