So, stop if you’ve heard this one before: What do you get when you cross a decorated newscaster, a masked misfit, a championship drag queen, and a fitness diva? Answer: Minnesota AIDS Walk (MAW).
The annual MAW is the signature fund-raiser of the Minnesota AIDS Project (MAP), a local organization that is committed to enhancing the lives of people living with HIV, advocating for people living with HIV, and preventing new cases of HIV. As for MAW, you know the drill: Intrepid hoofers recruit sponsors of varying sums, then trudge, trek, or trip around the paths of Minnehaha Park in Minneapolis. 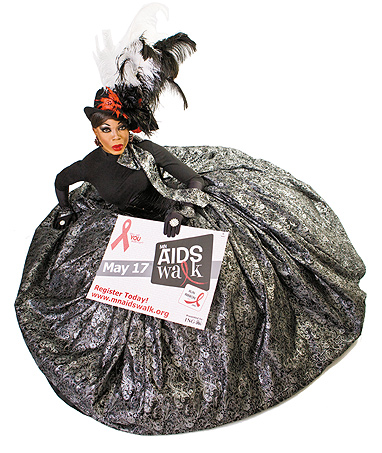 MAP Special Events Manager David Knapp says, “The AIDS Walk annually raises over half a million dollars. We do not charge admission for the Walk, but rather, we open up the fun to the whole family. It’s a great way for everyone to get involved, and we have incentives like T-shirts, track jackets, and digital photo frames for people who raise money.”

MAW is about more than mere walking, but never has that been truer than with the 2009 event.

For starters, Fox 9 News anchor Robyne Robinson will preside over the opening ceremonies. Her motivations are of the most personal, most urgent sort.

Robinson remarks, “I’ve lost friends. I’ve lost family. At this juncture, we’re at the eye of the hurricane, and we’re about to come back out the other side. We really need to be prepared—that’s what the research says.” 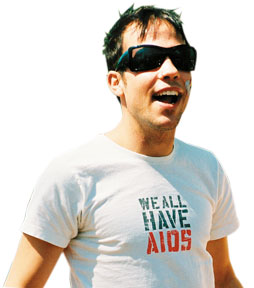 But that’s not all, celebrity-wise.

Knapp notes, “This year, we are having [cast members from] The Phantom of the Opera perform a few songs during our opening ceremonies. We are very excited about the draw of this traveling Broadway show.”

What’s more, a local sensation who’s nationally renowned for her show-woman-ship will present herself on multiple MAW fronts.

As Knapp reports, “We have reached an agreement with BeBe Zahara Benet, winner of RuPaul’s Drag Race, to help us elevate the promotion of the AIDS Walk. BeBe spoke candidly on RuPaul’s show of her experiences with friends who have HIV, and we are delighted to be working with such a genuinely compassionate individual.”

Benet, who will be walking the Walk after singing some songs, relates, “My team name is Drag It Out for HIV. My hope is that drag artists and the community have fun with it.”

But MAW isn’t all fun and games, according to Benet: “HIV is a very important issue—always has been. I think sometimes, people forget that it is still here. I want to draw attention to the issue, raise money, and have fun in the process.”

Because MAW involves actual walking, the gods of pulls and strains care nothing for the walkers’ collective good intentions, so MAP has provided an effective talisman.

Knapp points out, “We’ll have diva Doug Melroe from The Firm leading the park in a warm-up just before the beginning of the Walk.”

The most ambitious walkers will have the opportunities to exercise their minds, as well as their bodies.

Knapp comments, “We are adding a lot of educational information, both in the park and along the route, because in addition to being a fund-raiser, the Walk is a great way to raise awareness about the state of HIV today. HIV is a very different disease than it was five, ten, or twenty years ago, so it’s important for people to stay informed.”

Knapp, who is prepared to put his money where his feet are, shares, “I walk because HIV is a public health crisis. Due to the economy, funding has been on the decline, while the rate of HIV infections continues to rise. Furthermore, people with HIV are living longer, and have better outcomes, due in part to the services provided by organizations like MAP. Clearly, as the demand for our services rises, we need everyone’s help in order to be able to continue to provide our services free of charge to anyone who walks through our doors.”

As Benet puts it, “This is my call to all drag artists: Join me for the AIDS Walk on May 17 in Minnehaha Park!”