Nearly three decades have passed since HIV/AIDS officially was identified as the monster we know today. Last year’s 368 new cases of HIV in Minnesota rang in at a frightening 17-year high, according to the Minnesota Department of Health. Amid the numbers and threats presented by the HIV virus, the general public’s fear of contracting AIDS has diminished vastly, with concern taking a backseat to other health risks, plus major social, economic, and political upsets since the turn of the millennium. 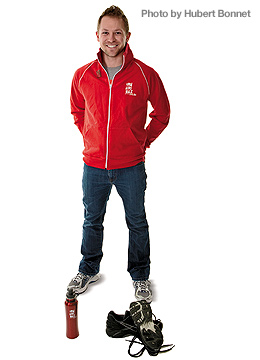 At the Minnesota AIDS Project (MAP), a nonprofit devoted to the fight against HIV/AIDS, the spike in new infections is causing a lot of concern. Combating the disease depends heavily on the outcome of its annual fundraiser, the Minnesota AIDS Walk, making this year an extra important one for increasing support.

While a large part of the Walk is meant to remember those who have been lost, plus celebrate those who are surviving, MAP Special Events Manager David Knapp reminds that it’s also a prime opportunity for teaching.

Knapp says, “The Minnesota AIDS Walk is a day to educate the community about HIV prevention, and to work toward eliminating stigma, while raising money for a great cause. We are so thrilled to get people talking about HIV, and teaming up to raise money to fulfill our mission to stop HIV in Minnesota.”

More than 5,000 people participated in the 2009 event, bringing in $540,000 for MAP’s numerous education and prevention programs across the state. It has branches devoted to public policy and the Legislature; legal services; an emergency hotline; and endless resources for any HIV-related questions. Trained volunteers from the community also visit schools, churches, and anywhere else with an audience statewide to teach about HIV prevention.

Still, Knapp insists it’s never enough: “Prevention education is a process, not an event, and it requires repeated messages throughout people’s lives, rather than merely a single lecture in high school, in order to battle such a complex sexually transmitted disease as HIV.”

According to Knapp, more people in Minnesota currently are living with HIV than ever before, with more than 6,200 known cases, and an estimated 2,500 persons who are HIV-positive, but have yet to be tested. These high figures could be the result of a number of factors: an increase in the number of people who regularly are tested; changes to state reporting laws; medications that prolong the lives of those infected; and/or a drop in HIV-prevention practices (i.e., safe sex and clean-needle exchange).

HIV is a preventable disease. The trick is just getting people to talk about it. MAP Executive Director Lorraine Teel worries most about the generation born between 1986 and 1995 who have become sexually active within the previous decade. Growing up hearing about new medications, with people living longer, more “normal” lives with HIV, has put them at ease, making them less likely to use safe-sex practices.

Teel states on the MAP website, “This perception clouds the reality that HIV is at best a life-altering disease of medications and doctor visits for the rest of your life, and at worst remains deadly. We cannot be silent to our young adults about the risks that come along with sex. The fact that many in this age group are testing is a good step, and means they’re hearing that message, but we need to continue to invest in education to reinforce methods of reducing the risk for HIV to support long-term behavior change.”

With the young gay male population in mind, MAP decided to aim this year’s Walk advertisements directly their way by using half-naked male models and plenty of sex appeal to grab their attention. State and national media have been questioning whether these sexy ad tactics were an appropriate choice for promoting the prevention of a fatal sex-related disease. But no press is bad press when you’re in the business of stopping HIV/AIDS.

Gene Frampton, a member of MAP’s Board of Directors, and his wife, Charlotte, who have been volunteering with the Walk since 1990, were quite alarmed to discover the rising level of ignorance about HIV/AIDS in recent years. Sometimes, when he tells people he volunteers for an AIDS organization, they act surprised, asking him if “AIDS is still a big deal.”

Charlotte relates from their home in Apple Valley, “We’ve worked at MAP’s State Fair booth, and people would come up and argue that it’s possible to get AIDS from mosquitoes, or by drinking from the same glass. In recent years, people just don’t seem to understand, and when you try to explain it to them, they give you the stink eye. They don’t believe you.”

Gene explains, “The problem is, the general public has forgotten about AIDS. It’s not in their face anymore.”

The Framptons can’t forget. Gene’s older brother, Clyde, died from AIDS in 1985, a time when it still was considered a “gay disease,” and sympathy was hard to find. He had been married with three beautiful daughters, but came out at age 40, divorced, and finally began living life the way he had dreamed for many years.

Gene recalls, “My brother lived a tough life in his first 40 years. Being gay at that time in our country was not an easy thing. He would feel very good about things that are happening now—the gay community and those of us who support the community.”

Clyde and his life partner eventually moved to Sacramento, where they opened a gay bar. Gene cites Clyde’s dedication to becoming the liaison between the city’s growing gay community and the police, calming tension, and bringing people together in peace. Gene still beams while talking about his big brother’s accomplishments.

After multiple odd health concerns, Clyde was diagnosed with HIV/AIDS in 1981.

Gene shares, “He was very open with us, but otherwise, you wouldn’t dare tell anyone [if you had AIDS] back then.”

Charlotte remembers Clyde being ostracized, and seen as “scary.” Doctors would suit up to go into his hospital room. The sign on his door read “Danger.”

As Charlotte comments, “It’s hard to believe we’ve gone from there to here, where young people forget about [AIDS], and don’t even use safe-sex practices.”

It would be easy to understand how the Framptons and others who have lost loved ones to AIDS may be frustrated to see such a preventable disease continually gain numbers, but this couple, both at age 70, aren’t pointing fingers at young people.

Charlotte remarks, “My frustration is not so much with them, as the cuts in funding, and lack of support for agencies who are trying to educate and prevent.”

Every year, Gene treks to the State Capitol with other MAP volunteers to put in a word to the Legislature about AIDS prevention, but their efforts barely get a nod.

Gene reports, “[The legislators] say, yeah, OK, thanks for the information. But they’re not interested. But they will be when it’s a member of their family who becomes infected.”

Regardless of setbacks, the Framptons stay optimistic, standing by their dedication to education and prevention. The Walk, MAP’s only major public fundraising event, is a day the couple looks forward to each year. Their three children and even grandchildren have participated, along with a crowd of all ages, races, and sexual orientations. It’s not just the GLBT community supporting the cause, nor can it be if some real changes are to be fueled. Minnesota needs a statewide effort.

As Gene puts it, “All we can do is keep pushing and keep trying. Wear a condom for crying out loud!”—his father-like tone resonating the simplicity of prevention in a single phrase.