It has been 30 years since San Francisco Supervisor Harvey Milk was murdered along with Mayor George Moscone in 1978. This is a story that was crying to be told onscreen.

In the 1980s, the late author Randy Shilts wrote an excellent biography of Milk, probing into his childhood and life before and after his relocation to San Francisco. Then followed an award-winning documentary, The Life and Times of Harvey Milk. In addition, an opera was performed based on Milk’s political life—appropriate, considering that one of his passions was opera. 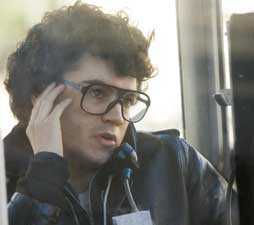 Now, a new biopic by filmmaker Gus Van Sant on the political life of Milk has opened in limited release. On December 2, I was part of a group of 82 from the Minneapolis Movie Bears that watched history captured on film at Landmark’s Uptown Theatre. A few had viewed it in advance over the weekend, but felt compelled to share the experience with the larger group that was diverse, including people of various generations.

This prompted a thought: Considering the length of time since the murder of Milk, how many of us can remember witnessing his legacy? Also, what impact does Milk have on us today? The latter is not just a gauge in terms of sexual orientation, but does Milk’s legacy resonate with the Bear subculture?

In canvassing the Minneapolis Movie Bears and friends who attended the film, I found most of us remembered Milk, even at the time when he was fighting California’s Proposition 6 ballot measure that would have prevented GLBT teachers from working in schools across the state.

Clearly, memories varied depending on the age of the viewer, from reading about and hearing Milk in the news to picking up literature that talked about his efforts for GLBT rights. In all, it seemed that across all generations, everyone came to the film with a deep understanding of who Milk was, and why his story had to be told on film.

Within the film were common themes that the audience recognized as contemporary in our lives, as they were in Milk’s day. The arguments made by Anita Bryant and State Senator John Briggs for Proposition 6 seemed as eerily familiar as the ones used in the last election for California’s Proposition 8 and the other same-sex marriage ban referendums in Florida and Arizona. Though Milk never got into the issue of marriage equality, some of the Minneapolis Movie Bears came away with an understanding of the breadth of the struggle our community continues to face today.

One of the biggest themes of Milk’s political life was the need for everyone to be open about his or her sexual orientation.

Eric Blad, a Minneapolis Movie Bears committee member, expressed this sentiment through a story about his working (closeted) in the human resources department of a software firm in Atlanta. Though he had an antidiscrimination clause written into his firm’s policies, he worked for two more years until he “couldn’t stand continuing to buck the system” run by the company’s upper management’s “personal and religious beliefs.” He said, “I left, and made a decision that day that my closet doors would never even remotely be shut.”

The impact of Milk’s life had an effect on the Bears attending the screening of this film. Many of us shed tears at various points. Emotionally, the film, as well as the legacy of the man himself, struck practically every one of the 82 hearts in the group.

Shayne Woosley, who attended the screening, offered the suggestion that “GLBT student groups and sociology classes should use this as [part of their] curriculum to inspire and educate those who were not even born at the time these struggles occurred.”

If there was one reaction shared by many of the attendees, it was the need to return to political activism. In light of the protests after the passage of California’s Proposition 8, Bears are among those asking for a complete slate of rights, including marriage equality. These are no longer issues identified with a subculture, but rather the larger sexual-orientation part of our lives.

Minneapolis Movie Bear Rick Notch gave even more perspective across the generations as to the fight ahead for our community: “Harvey Milk’s story should inspire all us who sometimes feel we’re too old to make difference anymore—40, 50, whatever, we’re still here, and there’s work to be done.”

As for the film, I defer my review to those who are more knowledgeable about the art and business of motion pictures. It seemed that everyone walked away with a sense of the importance Milk had for our community and our lives. It is a piece of GLBT history that 82 Bear-identified men and their friends will remember for their entire lives.