An Interview with Actor Emile Hirsch 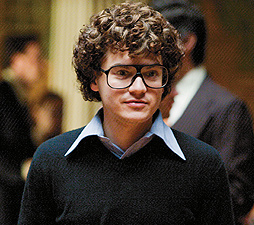 The mid-1970s brought gay activism to the forefront, with many moving to larger cities, creating gay enclaves such as the Castro in San Francisco, and standing up for their rights. This openness of the gay movement also brought a backlash from antigay groups, fronted by people like Anita Bryant, who went state-to-state, city-by-city pushing to overturn recently enacted gay rights measures.

Lavender recently spoke with Hirsch about Milk, and the effect that activists like Milk and Jones had on the gay community.

How did you get involved in this movie?

I think Gus [Van Sant], the director, saw Into the Wild at the Toronto Film Festival, and got it into his head that he wanted me to play Cleve [Jones], and I think he told Sean [Penn] later.

What was your view on gay activists when you heard about the part?

Has the movie changed your views or given you new insight into gay activism?

Oh, yeah. Absolutely. I have a lot of sympathy for the gay and lesbian and transgender movements.

I think Cleve is, you know, probably fairly like that—he’s kind of a queen in some ways.

Were you worried about overexaggerating your movements? Becoming a bit stereotypical?

No. He was such a specific presence, I wasn’t concerned. I thought that was him.

He is a bit of a legend in the gay activist world and in that movement. To get to meet him was very cool—someone who has done as much as him. He created the San Francisco AIDS Foundation and the AIDS Memorial Quilt. He’s had some heavy, heavy life experiences. It was incredible.

Did you find it more difficult to play someone you met, and who would be watching you later on?

No, I think it kind of helped me see firsthand the passion he had, the intelligence, the humor that he just naturally possesses.

What’s your take on Prop 8?

Your next movie—Taking Woodstock—deals with another gay character. You play a Vietnam vet. Are you progay or antigay in this movie?

I would say it is not even an issue in that movie. The character, I would say, doesn’t even think of it all during the performance.

Do you find playing such polarizing or non-leading-man characters a challenge?

I think its more fun to play interesting, colorful, quirky characters than the stereotypical character. It’s sometimes a challenge to play the leading man. They are so stereotypical in a sense. You’re trying not to fall asleep on the set.

What’s in your future? Do you foresee staying just outside of the Hollywood mainstream?

I don’t know, just looking for a good script with a good director. But I don’t see Milk as an indie film. I think it’s an amazing movie, a huge film. I think it’s Gus’s best movie and Sean Penn’s best performance. The sky is the limit for this movie—it’s that good.