Dallas’ ESPN radio station is male sports heaven. Whether dissecting a disastrous Cowboys play, dissing the Mavericks’ latest trade or calling for a coach’s castration, 103.3 FM is all-sports, all the time. 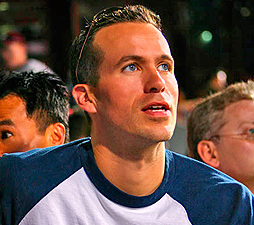 After getting over their initial shock, Texans are enjoying a taste of gayness with their noontime sports fix.

The queer eye for the sports guy comes courtesy of Cyd Zeigler. Co-founder of OutSports.com, his introduction to sports radio came several years ago. Kiley, on another station, asked him to discuss rumors about the sexuality of Major League Baseball players. The interview was strong; Zeigler became a regular, and the men became friends.

Last year, Kiley and Irvin launched their Dallas show. Kiley is a gifted host with many interests, while Irvin—one of the best wide receivers in National Football League history—is a thoughtful former ESPN TV broadcaster whose career was derailed by drug and other controversies.

When Irvin was seeking someone to pick winners of upcoming NFL games, Kiley thought of Zeigler—and suggested he retain his gay sensibility. Irvin loved the idea, because it was new and different.

“I assumed most pro football players are homophobic, so I talked to Michael for half an hour before accepting,” Zeigler says. The Hall of Famer spoke about his strong Christianity—Zeigler calls it “love thy neighbor; embrace everyone”—and a deal was struck. Once a week, Zeigler would chat by phone from New York, picking winners against the betting spreads.

After the first show, letters and e-mails poured in. Most disliked the idea of an openly gay man being featured on a football show. Irvin was surprised by the outpouring of emotion, but forged ahead.

As the season wore on, the negative reaction eased. “It was good radio. People listened,” Zeigler explains. “And in the first couple of weeks, I was 29-19 picking against the spread, which was absurdly good.” One day he analyzed an upcoming matchup with tremendous precision.

“Michael said he didn’t know a gay man could have that insight,” Zeigler recalls. “That got his respect.”

Station managers were “probably worried at first,” Zeigler admits. “It’s their job to be nervous.” But ratings were high, trumping any fear.

Almost every show, Zeigler and the co-hosts tackled a gay subject. One week, Zeigler revealed which quarterbacks he thought were hot; another, he ranted about organized religion’s role in California’s vote to overturn same-sex marriage.

“My theme song is ‘I’m Super’ from South Park, so it’s pretty clear I’m gay,” Zeigler says. “And on the show, I gay it up a bit. One day I hit on the board operator and producer. That’s what you have to do on radio.”

But Zeigler’s weekly segments were just a prelude to Dec. 23. Zeigler and his partner Dan were driving cross-country, to their new home in Los Angeles. Irvin and Kiley invited both men to the studio. Zeigler was the sole guest, for the entire three-hour show.

The show ranged from light issues (which partner cooks and cleans?) to heavy. When Zeigler asked Irvin his position on gay marriage, the football star admitted he had not thought much about it. But then he did—and said no one should tell anyone else how to live his life.

“The day was amazing,” Zeigler says. A woman called from Oklahoma to say that 103.3 was the only station she could hear that day, and the conversation was “a gift from God.” A Dallas man declared it was time for prejudice against gay people to stop. Other callers lambasted the hosts for “promoting the gay lifestyle.” Some just wanted to get back to sports.

The genuinely thoughtful questions from Irvin and the listeners impressed Zeigler. “Being able to educate in that way is what this show is all about,” he says.

Zeigler gives huge props to Kiley for proposing and advocating for the show, and to Irvin for being so comfortable with it.

But Dallas is the only city with a regular gay guest on a major sports radio show. Why?

“I can’t say enough about Kevin—who was raised in a white Southern household—and Michael, raised in a black ghetto household. No one clamored for them to do this. But they put their reputations on the line and did it—in Dallas. That says so much about them. All I do is show up.”