STYLEDLIFE® founder Kevin Quinn and New York-based couture designer Zang Toi have been close friends for 20 years. They met as experienced fashion industry idealists in New York City and over two decades, both have grown into respected members of the fashion and retail communities. 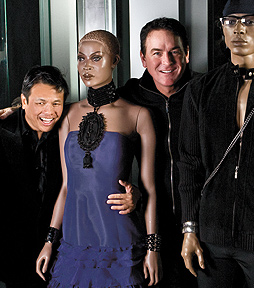 In 2000, Quinn embraced his entrepreneurial side and founded styledlook®, an at-home wardrobe consulting business. In 2006, he founded STYLEDLIFE®—a high-end accessories and import music store in Minneapolis. Last month, STYLEDLIFE® moved into a 3,000 square foot flagship at the Galleria in Edina.

Toi hopped a plane from the Big Apple to the MinneApple to celebrate STYLEDLIFE®’s growth with his long-time friend. Lucky for Twin Cities clotheshorses, he brought along his luxurious fall and Madrid-inspired spring collections as well.

Despite Toi’s longevity and success, his recent appearance on The Real Housewives of New York City as Jill Zarin’s favorite designer was a break that sparked his new brand recognition and increased mass appeal. Toi’s celebrity client list extends from Fergie of the Black Eyed Peas to Ivana Trump, Melinda Gates, Eva Longoria Parker, and Sharon Stone. Still, mainstream America doesn’t know Toi’s name. We sat down with him to find out a little more about the man in the black velvet kilt.

Name: Zang Toi
Age: 48
First fashion memory: When I was 7, I helped my mother pick out fabrics for her custom-made cheongsams [ed: traditional long dresses worn by Chinese women].
First fashion inspiration: Old Hollywood movies.
Three words to describe your upbringing: honest, loving, and family.
Biggest inspiration: Right now, it’s a place of my imagination that is sexy and mysterious.
Best advice: My parents taught me the best work ethic.
Fashion rules: I don’t believe in fashion rules. It’s always great fun to be rule-breaker!
Alternate careers: If I weren’t in fashion I might have become a chef or a decorator.
Signature color: I used to wear color, but after I decorated my apartment [ed: in black, white and silver], I started wearing all black.
Dirt on Jill Zarin: I don’t kiss and tell except that she’s an absolutely kind lady.