May The GForce Be With You

Glenn Witman put together a nice hockey team. He signed former college and club players—guys who knew how to skate, shoot and check. They won their share of games in rinks around the U.S., but Witman wanted to test them against tougher competition. 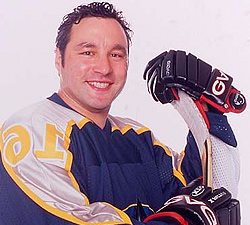 Last year he entered his squad—Team GForce—in a Chicago tournament. “It was an eye-opener,” Witman says. “One team had several former Blackhawks, a guy who’d played for the Washington Capitals, someone on the Rangers when they won the Stanley Cup and some ex-American Hockey League stars. They whipped our ass.”

Afterward, as the two teams drank together at a bar, a member of the winning team surveyed Witman’s squad—composed of players as far-flung as Minnesota, Texas, New York, Quebec and California—and asked casually, “So, how do guys know each other?”

All eyes turned to Witman. “So I told him,” the team’s founder recalls. “I said we were gay. They were all cool with it.”

That’s been the way it goes, generally, for this national gay hockey team. In five Friendship Cups—games in Aspen, Colorado against straight opponents—they’ve gone 3-3, earning respect and admiration for their spirit, skill and style. This year’s event, held in January, included the showing of a documentary promoting the idea that openly gay athletes can play and enjoy sports at all levels.

“We want to break down negative stereotypes of gay people by playing straight teams,” Witman says. “We still get, ‘You’re a gay hockey player?’ But there’s less of that all the time.”

Another aim of GForce is to serve as role models for closeted gay athletes, as well as for their straight teammates.

The next day, more than 600 fans watched GForce beat the Eurotrash Allstars. “It was a ton of fun to play in front of so many people,” both gay and straight, said Eurotrash player Dave Elkin.

The documentary, by filmmaker Bob King, was filmed during last year’s Friendship Cup. In it, a GForce player says his team shares “a love for hockey—and for guys.” There is plenty of hockey action (and, of course, a couple of obligatory locker room shots).

But the best lines belong to fans, interviewed on Aspen streets. One admits, “We’re not for the gays.” Another believes there will “probably be more manly men on the straight team.”

But a woman, speaking while hockey players looked on, thought those athletes were straight. In fact, they were the GForce. Another woman told GForce: “You’re super hotter than the straight guys.”

This year’s Friendship Cup was in doubt, a possible victim of the tottering economy. But a couple of weeks before cancellation, GForce raised nearly $10,000 from players, friends and even strangers who read about the need on the Internet. The team flew to Colorado for their sixth annual game against Aspen’s straight all-stars.

Though GForce lost 5-4 in the final three minutes, Witman says they fell to “the most talented Aspen team in years. We showed again that GForce can play with anyone.”

It was an action-packed week for GForce. Besides the game, there were practices, parties, a calendar shoot—and the documentary premiere. It will be shown again in Los Angeles in May, when GForce participates in Big Sunday and Hockey Fest for underprivileged California youth hockey players.

“We’re not just playing hockey and winning some games,” Witman says of GForce’s efforts. “We’re out there really trying to change minds. We want to foster an environment of tolerance and understanding, where straight and gay athletes can embrace their similarities and enjoy a great game of hockey. We want to give youth the role models we never had. We want to show them they can play hockey—or do anything they put their minds to.”

E-mails and letters from hockey players around the country assure Witman that GForce is accomplishing its goal. And the effect is spreading beyond gay hockey.

Witman also plays on a straight team in Denver. For years, before he came out, “all I heard was ‘faggot this, fag that,’” he says. “Now everyone knows about my other team, GForce. If a new player says something anti-gay, everyone else tells him, ‘Hey, that’s not cool.’”

Dan Woog is a journalist, educator, soccer coach, gay activist, and author of the “Jocks” series of books on gay male athletes. Visit his Web site at www.danwoog.com. He can be reached care of this publication or at [email protected]