In her book The Meaning of Matthew: My Son’s Murder in Laramie, and a World Transformed, Judy Shepard described a crowd of 600 that gathered in Laramie, Wyoming, for a candlelight vigil on the eve of the jury selection in the trial of one of the killers of her son, who had succumbed after a savage beating almost exactly a year before, on October 12, 1998.

A tribute concert by Peter, Paul and Mary also took place. Before the concert, Peter Yarrow of the trio described how he had visited the wooden fence where 21-year-old Shepard had been tied, beaten, and left to die. 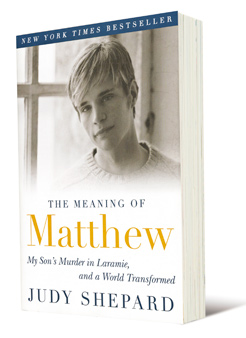 When Yarrow arrived at the fence, Judy Shepard related in the book, “He probably saw 150 teddy bears left there by two young men who had hiked the 80-mile journey from Fort Collins to Laramie and back again to bring the bears (each of which represented a different hate-crime victim) and leave them at the fence.”

In the wake of the murder and trials, hundreds more teddy bears were created and donated to the family in Shepard’s memory. Displayed at The Dancing Bear Museum and Folk Center in Thermopolis, Wyoming, they are used to educate school children about diversity. In like manner, they are a tangible reminder of the national and international response to a hate crime that shook our nation, and resonated with children and adults around the world.

Dennis and Judy Shepard created the Matthew Shepard Foundation to honor their son in a manner appropriate to his dreams, beliefs, and aspirations. Its aim is to “Replace Hate with Understanding, Compassion and Acceptance.”

In 2002, a group in Denver established a benefit for the foundation in which prominent local personalities designed and dressed teddy bears in their image. The event has grown to become the largest-annual fundraiser for the organization, with attendees from around the nation.

On March 11, Judy Shepard and members of the foundation will be at the Graves 601 Hotel in Minneapolis for the second-annual Bear to Make a Difference on the Road. The highlight will be a silent auction of 50 celebrity signed/inspired teddy bears from donors including Michael Bublé, James Earl Jones, Lady Gaga, Dolly Parton, Meryl Streep, and dozens more. Admission includes a signed copy of The Meaning of Matthew and an official 2011 Bear on the Road Minneapolis Teddy Bear.

In addition, the foundation will present its Making a Difference Award to Minnesota First District Congressman Tim Walz, who voted in favor of the enacted Matthew Shepard and James Byrd, Jr. Hate Crimes Prevention Act and the proposed Employment Non-Discrimination Act (ENDA). Sculpted by renowned artist Chris Navarro, it is given annually to “an individual who has shown a commitment to educating the greater community on diversity, respect, and human rights.”

Walz stated, “Every violent crime is devastating to the victim and his or her family, regardless of whether the crime is random or motivated by some other reason. But hate crimes are committed against more than just those attacked—they are often intended to create anxiety and spread fear. This legislation starts to make sure that law enforcement officials have the resources they need to prosecute these despicable crimes. Every American deserves opportunity without fear of being discriminated against because of who they are.”

Regarding the award, Walz remarked, “I am honored and humbled to be receiving this award. Judy Shepard has literally inspired a generation of Americans to justice, and I am proud to call her a friend. I am proud to strongly support civil rights for all Americans, and I believe the principle of tolerance our great nation was founded on is nonnegotiable. I will accept this award knowing that I share it with everyone who has been an advocate for justice, with anyone who has stood up for equality in large or small ways, and that we will not rest until every American is treated with the dignity and respect they deserve.”

Judy Shepard pointed out, “This event in Minneapolis is just part of the work the foundation is doing. Anything that can raise awareness of the issues is positive, and to be a part of that is an honor. There has always been a special connection between the Twin Cities and the foundation and to us personally. We have family in the area, and have been here many times and have always felt welcome. I think Minnesota is a very important part of the movement to advance equality for the gay, lesbian, and transgender communities.”

Shepard shared some thoughts with Lavender.

• On the “It Gets Better” movement: “Anything that raises awareness about a shared experience is good—especially if the outcome is positive.”

• On changes in attitudes toward gay youth in the 12 years since Matthew Shepard’s death: “It seems that the younger generations have been exposed to LGBT stories all their lives—that only leads to more understanding. Progress is being made in urgency and priority, but getting widespread cooperation is difficult.”

• On continued growth of antigay feelings and activities in the far religious right: “No. I don’t think it is growing—in fact, I’m seeing a shift in focus from some of these organizations, particularly among the younger congregants.”

• On the possibilities for change: “There is always hope. A personal epiphany is always a great game-changer.”