Male/Male (M/M) romance novels are not all that strange a niche, particularly to the GLBT reader. But when you have a straight woman writing them, and the books are geared toward other straight women, you reach a whole new dimension.

Live Journal, an online journaling community, currently has more than 300 communities for M/M romance. Works of this type written by straight women are a growing market. 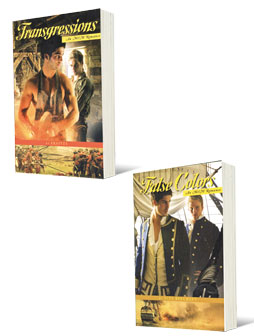 In April 2009, Running Press published two books in this genre: Transgressions, by Erastes, and False Colors, by Alex Beecroft. Both have all the aspects that fans of such fiction will love—prohibited love, mysterious locations, and sexy leading men.

Transgressions, set in the Civil War era, tells a tale of a father who brings home a young man to help his son work the family forge. The son’s reaction to this new, handsome stranger is not one his father would approve.

In False Colors, set in the 1700s, a lieutenant of the British Royal Navy falls hopelessly in love with his new captain. Will he follow his punishable love?

The question remains: Why do straight women write and read M/M romance novels?

One reason could be that if one man is sexy, two men just make it even sexier. You have heard that many men enjoy the idea of two women being together. Well, surprisingly—or perhaps unsurprisingly—a large number of women enjoy the thought of two men together.

Another reason is that M/M relationships do not have the same gender stereotypes as straight relationships. There can be much more to these characters, and they don’t need to fit into typical female and male roles. The story really can go anywhere, with no social or expected boundaries—enticing to both the writer and the reader.

You be the judge.

The success of the movie Brokeback Mountain and the show Brothers and Sisters could fit into this category. M/M relationships are becoming more acceptable to the younger generation, and even some older generations, perhaps because of what is trendy, new, and fresh to young straight women.

Are these straight writers trying to even the score?

Maybe they want to get the message across that all love is the same, whether it is male/female (M/F), female/female (F/F), or M/M.

Women were put into a box for so long throughout history. Now, they have the same opportunities as men, and they are voicing their opinions. They can write what they want, and for whom they want, and it doesn’t have to hew to the prevailing social norm.

Thus, many people might argue, “Why not?” Being a straight, married woman is a life many of these writers and readers currently live. Been there, done that. To write or read about something completely foreign to one’s own experience is an escape, and let’s face it: Isn’t that why most people read fiction in the first place?