Minneapolis screenwriter and playwright Jeffrey Hatcher once again shows his brilliance as an observer of sex, gender, and history in the gorgeous new film The Duchess, starring the exquisite Keira Knightley. Cowritten with Anders Thomas Jensen and the film’s director, Saul Dibb, it speculates on the life of Georgiana, Duchess of Devonshire, in the late 18th Century. The Duchess also reverberates with new relevance on the nature of traditional arranged heterosexual marriage. 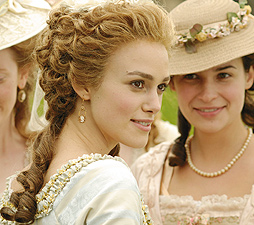 Hatcher penned the play Compleat Female Stage Beauty, which mused on the life of English Restoration actor Edward Kynaston, who played women’s roles at a time when the theater at last came to allow actual women to play those roles. Hatcher adapted it into the screenplay of the acclaimed film Stage Beauty.

As well, Hatcher wrote the sparklingly seditious adaptation of Nikolai Gogol’s satire of 1830s Russia, The Government Inspector, that played at the Guthrie earlier this year.

I spoke with Hatcher about his knack for making the distant past immediately relevant.

You have a remarkable ability to embody a spot-on historical sense, while at the same time weaving ideas of sexuality and gender that have made their way into the collective consciousness since the 1960s and ’70s. You remind me of Gore Vidal in that way. When I see a film or play that you’ve written or cowritten, I see a period recaptured, and yet being a man of our current time, you also bring concepts of gender and sexuality that wouldn’t have been thinkable 50 to 60 years ago.

All those concepts exist in those other times. It’s just we tend not to have spoken about them for the past 50 or 60 years. All you have to do is read the poetry of the Earl of Rochester in the 1660s to know how frank people can be about sexuality. So, I think it’s really our own Victorian or post-Victorian middle-class morality that tends to drape itself all over these issues. All you need to do is a little bit of digging, and there it is.

I was fascinated by Ralph Fiennes’s performance. His acting, the direction, and the writing made me actually feel some sympathy for him. In the scene where you see him with his mistress there at the table with his wife, you think he’s a total son of a bitch. But when it’s all said and done, we see this man trapped inside this oppressive social and gender role of the 1770s that’s every bit as overwhelming as the roles women were constricted into. I don’t know that I’ve seen that as fully portrayed in a film as I have in The Duchess.

It would be very easy to play that role in a Basil Rathbone kind of way, so I think the huge percentage of the credit goes to Ralph Fiennes. But truth be told, there’s one scene in particular that I’m rather pleased with—and I’m sure glad it stayed in the film—where the Duchess watches the Duke with Bess’s boys. They’ve come to live at the house, and you see the Duke trying to show one of Bess’s sons how to handle a hunting rifle. And you realize although he keeps saying he wants a son for reasons of his estate, you also realize he’s just a guy who’d like to have a boy. He would love to have a son to walk around with and to talk to. So, sometimes, all you really need to do is show a little bit of what the character wanted at his deepest place. I’m not sure if it redeems the Duke, because he does do some son-of-a-bitch things, but it always seems to me to make what can be rather one-dimensional characters multidimensional.

The late Heath Ledger certainly achieved that as Casanova, for which you wrote the screenplay.

What’s interesting about Heath is that I think he approached characters through voice. I don’t know that anybody else would say so. But I think that once he figured out the voice of a character—the diction, the tone, the resonance—he seemed to be able to follow it to its natural conclusion. I think Brokeback Mountain is his triumph. And when you think about it, the way that character spoke is very odd. It’s a very peculiar way of speaking—as peculiar as the way he speaks as The Joker in The Dark Knight. But in Casanova, I think he chose to speak—and I may be going out on a limb—I think he’s kind of channeling Jeremy Irons, kind of doing that kind of voice that Irons would have had 25 years ago. What was great about Casanova is that again, [it’s] a man that could easily have been written off as a bounder and a cad. Let’s face it: He’s Casanova. But Heath was able to find the little boy in all that.