Robert Alexander, author of the widely acclaimed The Kitchen Boy and Rasputin’s Daughter, serves up yet another volume of intrigue, scandal, and history in his recently published The Romanov Bride. 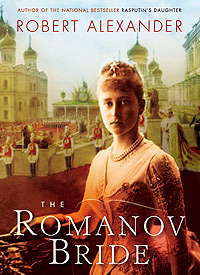 Alexander interleaves Ella’s story with that of Pavel, a peasant revolutionary whose father and grandfather eked out miserable existences as serfs. Pavel’s own hopes are dashed when his beautiful wife, pregnant with their first child, is gunned down in 1904 by the Tsar’s guards. The revolutionary vows to destroy the Romanovs. Ella, after Sergei is assassinated by a terrorist bomb, renounces her worldly riches to found a nunnery.

Alexander talked recently with Lavender, and explained, “All along, I knew I wanted to tell the story about Elizabeth, but I wanted also to focus on what she was struggling against. The revolution was sparked by some very real reasons, the gross inequities of the times, and so, I wanted to write not only from her point of view, but to create a peasant who was struggling for a sense of belonging—a place at the table. Thematically, Ella came up against a very dark event, and turned down a path of enlightenment, whereas events turned Pavel down a darker path of darkness and destruction.”

As Alexander enlightens, “The character of Elizabeth is obviously not made up, nor the other principal characters, but Pavel is a composite. I read an account of a revolutionary who committed a number of murders and dark acts, and had to flee from Russia. He came all the way to North Dakota, and he reinvented himself as a favorite mathematics professor. Pavel was inspired by him—the terrible things that desperate people will do. The person that threw the bomb at the Grand Duke Sergei left behind his letters and notes and stuff, so that incident is based on his life.”

It’s difficult to remember, immersed in the brocaded exoticism of the Tsar’s court and the squalor of the masses, that the Revolution of 1918 is not some medieval aberration.

As Alexander confirms, “We have so much of the old technologies of paper and pencil, and then, we have new technology—a little bit of motion picture, and massive amounts of still photographs.”

Alexander constructs conversations between Pavel and Ella during their respective incarcerations that reveal the tragic incompatibilities of their philosophies, although the author chooses not to probe too deeply into Ella’s marriage.

“All indications were that Sergei was gay,” Alexander shares. “I was trying to show what a closed topic it was at the time, and how, if he was gay, which I do believe he was, that meant she was isolated—in her sexuality, her marriage, in being able to reach out and talk to anybody.

“There was another Grand Duke at that time, Grand Duke Konstantin Konstantinovich, a terrifically handsome man. He was the poet KR. He fathered nine children, lived in a marble palace, was widely respected, and asked that his diaries be closed for 90 years. Well, they were opened up a few years ago, and guess what? He was ‘sinning’ with the stable boy, or the boy down at the sauna at the banya all the time. So, were there other Romanovs who had at the time what they call ‘grammatical errors’?

Alexander adds, “Russians gossiped incessantly, because they had no freedom of information, then, or, really, until recent times, so they only got their information tongue-to-tongue-to-tongue, and it’s very difficult to sort out what was rumor versus what was reality. The reality is that Ella was very devoted to her husband, but they never had children, and she was very much a repressed housewife.”

Long after the murders of Ella and her faithful attendant, they were canonized: in 1981, by the Russian Orthodox Church Outside Russia; and, in 1992, by the entire Russian Orthodox Church—as New Martyr Saint Elisabeth and Nun-Martyr Saint Barbara. In 1998, a statue of Elisabeth was installed above the Great West Door of Westminster Abbey in a ceremony attended by her great-nephew, Prince Philip (born Prince Philip of Greece and Denmark), and his wife, Queen Elizabeth II.

“It’s all the same female line,” Alexander points out, “and they’ve done the DNA sampling primarily through Great Britain’s Prince Philip, because he has the mitochondrial DNA.”

This propinquity of the historical events gives immediacy to a text augmented by Alexander’s mystery-writing skills—he also writes as R.D. Zimmerman. The cinematic cutting of scenes between Ella and Pavel moves the story along briskly, allowing the complexity of the personal and historical threads to be digested in manageable bites.

Alexander’s Romanov books have been published widely—but not in Russia.

According to the author, “They are translated into Finnish, Serbian, Portuguese, Italian, French—I mean, all around, but not in Russia. I’m very sensitive to this issue. First of all, for the Russians, their revolution ended not in 1918, but in 1991. And they’re still coming to terms with it. On the other hand, I’m an American. I can’t attempt to interpret their history for them, and I wouldn’t want to presume that I could. What I’m trying to do is write Russian history for Americans and foreigners as a bridge to cross to more complex subjects about that time period.

“If I were writing a mystery series [which he has, as Zimmerman], I’d be writing different episodes with the same lead characters. This is, in a way, a series, but it’s looking at the same catastrophe from different points of view, which, to me, is captivating. I’ve been going to Russia for 32 years. You follow a passion, and I have a passion for Russian history—and somehow, it’s working.”

Until a fourth volume appears, Alexander recommends reading Robert Massey’s Nicholas and Alexandra and Edvard Radzinsky’s The Last Czar, as well as exploring alexanderpalace.org and the author’s Web site at www.theromanovbride.com.