Living (and Living…) With HIV

By all rights, Richard Carper should have died. Carper was diagnosed with HIV in 1984—during the decade of Duran Duran, Ronald Reagan…and Ryan White. It was that dark, pre-AZT epoch when testing HIV-positive was a certain condemnation to a slow, excruciating, and ugly death. 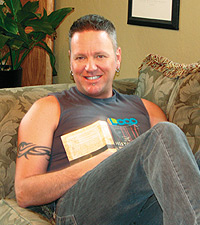 “It was crazy time,” according to Carper, who these days works as a data manager for a local corporation. “Back in the day, people were reluctant to let me hold their baby, or, going to someone’s house, they didn’t want me to do their dishes. They wouldn’t really say why, but we all knew.”

Carper’s was a rough diagnosis delivered roughly. He had signed on with the United States Navy, and just before the final “t” was crossed, and the final “i” was dotted, he was escorted by military police into an office whose sole purpose was to reject recruits.

“All my paper work was there,” Carper remembers, and the officer presiding over the proceedings told him, in his words, “I was a lying, hypocritical faggot, because I had the AIDS cancer, and I was going to die. I was told there was no room in the US military for people like me.”

Carper didn’t even have the slightest idea that he was sick—this is how he found out he was HIV-positive. But that may have been the only thing positive in his life for the next decade.

“I ended up wandering around for a while,” Carper recounts. “I figured I was going to go kill myself, because I’d been told I was going to die anyway. I really had no knowledge of what [HIV] was. I mean, I think I’d heard about it on the news. I was homeless, so I didn’t get a chance to sit down and watch TV a lot, and it wasn’t really talked about, so I had no knowledge of it except that other people got it.”

Carper was a young man suffering alone through a gloomy present that was not tethered to a future, but to the void

“I went into the phase of writing a lot of bad checks, and spending a lot of money that I didn’t have,” Carper recalls, reviving a dismal breed of liberation. “I never thought I’d have to worry about any kind of retirement, buying a house, going to school—I didn’t continue my education. I didn’t do anything, because I was going to die. I ended up just living day to day, just waiting to die.”

The agony of that waiting was alleviated chemically.

Eventually, very eventually, even the most obtuse of medical professionals saw that HIV was affecting Carper differently than most—but survival had, and continues to have, its price. After years away from crystal meth, he relapsed, which proved to be a turning point.

“I think that’s when I really, really chose to live my life,” Carper shares. “At 34 years old, I realized I’ve got to start focusing on retirement, on getting a job and keeping it, and on continuing my education—all the things I never, ever thought I’d have to worry about. And,” he adds with a laugh, “it’s kind of a chore. I just turned 40 years old. When I wake up in the morning, I feel like I’ve got bricks strapped to my head. I don’t know if that’s HIV, or just being 40, but it sucks.”

Nietzsche holds that what does not destroy one makes one stronger, and Carper’s very existence is a testament to that notion.

“On a life level, I am so much more advanced, like many people living with HIV are,” Carper reports. “Every single day, I am so appreciative of every color of every life that exists. It’s just crazy. People say, ‘Oh, that sounds so cheesy and cliché,’ but I seriously believe it’s true. The fact that I can pump out wedding cakes and birthday cakes and anniversary cakes, and the fact people who know my status ask me to do this without worrying that, you know, I’m going to bleed into the cake or something—I have a truly amazing life.”

And, strangely—or not so strangely—HIV is an integral part of that amazing life.

“I am who I am today because of my HIV status,” Carper insists. “I know the people that I know today because of my status. I had the attitude of a prima donna, but I’m so not about that now. I do the 300-mile bike ride every year for the Red Ribbon Ride. My partner works at Minnesota AIDS Project. I know a lot of great people through Minnesota AIDS Project, Minnesota AIDS Walk, and the Red Ribbon Ride. And I wouldn’t know any of these people, and I wouldn’t be at all who I am today, had I not been HIV-positive.”

That begs an obvious question: If Carper hadn’t become infected, who would he be?

That isn’t to say Carper endorses HIV as some kind of “lifestyle choice.” He urges everyone, especially queer youth, to employ every ounce of HIV prevention available to them. That said, Carper has been surprised by the bond formed between him and his fellow advocates.

By all rights, Carper should have died—“but,” he supposes, “I wanted to live more.”