The Black Pride celebration is coming up. Some of the most luminous local GLBT talents of color will showcase various performance pieces in Lift Every Voice and…BE!, a fund-raiser on August 15 that will lay the groundwork for HIV/AIDS consciousness-raising at Pillsbury House Theatre in Minneapolis. Performers so far include Khalid Adams, Andrea Jenkins, Alphonso Morgan, and Sol. And the list is growing. 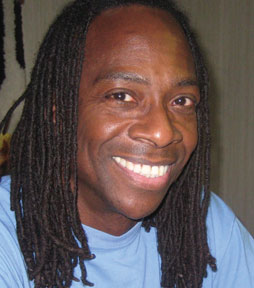 Twin Cities Black Pride Chair Earnest Simpkins, says, “Many of the local LGBT artists who are in the lineup for the show are community members that I not only know personally, but whose life force has inspired my own journey, as I continue to strive to bridge the gaps between all my identities as a black gay man raised in the Twin Cities.”

If you don’t track the local African-American performance scene, the Twin Cities has one or the richest talent-of-color pools in the nation.

Waters calls the Pillsbury House show “an event to celebrate black LGBT voices, particularly those marginalized, and often overlooked and intentionally underrepresented, within the [larger] gay community. What does our voice sound like, and are we able to hear it amongst the throng and cacophony of needs? Let us celebrate these GLBT people right now, and talk to the rest of the community, as we gain our own perspectives.”

One of those perspectives will come from Andrea Jenkins, a seasoned advocate for transgender issues who will read from her new book project Pieces of a Scream. It explores gender identity, time, space, home, and memory.

According to Jenkins, “Many of the poems were inspired by original artwork that will accompany the text.”

Jenkins sees the fund-raisers she takes part in as “an opportunity to shed light and understanding on queer communities of color, as well as supporting the efforts to bring that community together. I believe that poetry and literature play a significant role in community development, and I am thrilled to be a small part of that.”

All proceeds from the August 15 event will go to cover expenses for The Red Party on September 12 to raise awareness around HIV/AIDS. Minnesota AIDS Project and African American AIDS Task Force also are involved in The Red Party. Communities of color have been affected disproportionately by HIV/AIDS. Cuts in corporate and government funding, along with the current health-care crisis, only exacerbate the situation. Lift Every Voice and…BE! is a way to get the ball rolling toward assistance to GLBT communities of color that are affected.