Over the past 12 years, Canadians Tegan and Sara Quin have carved out a distinct place in the music world. Mixing pop, rock, folk, and a personal style, the identical twin sisters—both lesbian—have made album after album of songs that not only are fun to listen to, but also reveal a depth rarely heard in modern popular music.

The duo, currently touring North America along with their backup band, hit the Orpheum Theatre on March 24, supported by Steel Train and Holly Miranda. I talked to Sara Quin just as she was about to start the US leg of the tour in February. 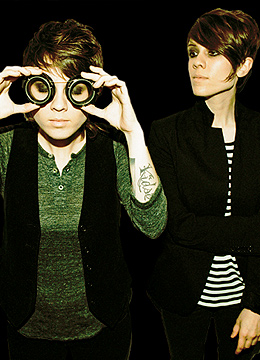 Sainthood has been out for several months. Have you had a chance to go back and listen to it?

I haven’t done that yet. Before the album gets mastered, I listen to it a lot. I listen to make sure every note is in the right place. After that, we are transitioning to doing the songs live. Now, we are playing Sainthood in its entirety every night, and it would get in the way to listen to how we recorded it. The show is working so well live that it wouldn’t be good to do that. I did go back and listen to The Con. It was interesting to hear how different those songs are. It was definitely a melancholy record. We quite accurately captured a time that was more challenging for us than now. It really reminds me of my Grandma and her passing, and of a relationship that was ending. It was an emotionally charged record. Sainthood is lighter than that. You’ll have to call me back in a year, and see how I feel.

Now that you have a number of albums under your belt, is it harder to play all of the songs you want night to night?

Yes, absolutely. It really is challenging to fit everything. The key is to play what the audience most wants to hear. As musicians onstage, you have a dozen songs that you wish you could play as well, so we are trying to find a good balance. I think we sort of landed on the right master list of songs that we will be playing on the next couple of tours. If we have a bad show, I’m happy to continue on, but there are others who want to cleanse the set list when that happens.

Touring in the winter can’t always be the easiest. Are you worried about the weather and sickness?

I think we have those concerns. We are a group of 13 on the road, so if at any given time someone isn’t ill, it is a small miracle. We have gone 10 years, and there have been just a couple of shows per album that have been canceled. That’s one of the good things about being in a band with Tegan. We can go on even if the other one is sick. I’ve played with colds, flues, and full-on allergy attack. Tegan had pneumonia once, and there was an outbreak of whooping cough on one tour. You have to be near death to cancel a show in our world.

You each write songs on your own. Do you help each other as you are putting the pieces of each one together?

We do both write songs individually, but there are always different levels of collaboration. We did do some writing together on the album. “Paperback Head” was written totally together. The music was originally Tegan’s, but I wrote the melody and the lyrics. I certainly enjoy writing on my own. I’m always surrounded by people—standing in front of hundreds or thousands onstage, doing photo shoots, or being with the band and crew. There is nothing solitary about what we do. There is something about songwriting that is very calming. I enjoy going off on my own. We did collaboration with Tietso [“Feel it in my Bones”] where we both took shots at writing verses and choruses. When we do it live, we strip it down acoustically, which feels very different to me. We each naturally gravitate to different keys, and it showcases really well how different we sound. We each have different instincts when it comes to melodies. It’s been fascinating to play it every night. I really enjoy it.

How has your music and relationship changed over the years?

Most siblings do their own things. Tegan and I have made a career together. We’ve witnessed how our individual lives have changed, and how our dynamic has changed. We’ve hit a stride. We still have our moments—when you are working the way we do, you always have those—but I am grateful for the relationship that we have.

What has been the mood in the different cities and countries you’ve toured in recently?

There is a different energy in the United States. I’m so grateful that we are able to tour. It’s not a small thing for people to come and see us. It’s a luxury item. And some places that are the hardest hit—those are the best shows. It’s amazing how sometimes people who are down on their luck and the hardest-hit are the ones who respond the best to us.

Any special thoughts about playing in Minneapolis?

I think it was one of the first places we could play on our own, not as a supporting act. I always thought that was because Minneapolis was kind of Canadian. I love it there. It’s been a great city for us.