The League of Minnesota Human Rights Commissions holds its 37th annual conference on October 4 at the Kahler Grand Hotel in Rochester. It celebrates 60 years of the United Nations Universal Declaration of Human Rights, with the theme “Strategies to Strengthen and Invigorate Our Communities.” 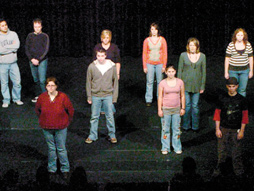 Individuals from Minnesota’s GLBT community will be speaking and presenting workshops, beginning right from the start with Minneapolis Civil Rights Commissioner Louisa Hext, who will be among the group giving opening remarks for the daylong event. She is also the area representative for the Astraea Lesbian Foundation for Justice.

The Minnesota Freedom Band Jazz Combo will perform at lunchtime.

Kristian Maul of the Trans Youth Support Network and others will host an afternoon session on GLBT issues.

Their focus on transgender youth is truly remarkable, given vitriolic neoconservative outcries in recent years against the very idea of trans issues even being thought of in relation to youth. That said, transphobia often has been used as a wedge for gays and lesbians who don’t quite have the mettle to be trans-inclusive. And the idea of trans kids is even more of a hot button. Hence, it becomes a topic prone to get pushed off to the side.

The workshop focuses on gender-identity and expression-discrimination protections in the Minnesota Human Rights Act (MHRA); issues and barriers that trans youth and adults may face; and how local human rights commissions can help educate their communities.

MHRA prohibits discrimination in a number of areas, including employment, housing, public accommodations, and education (see Minn. Stat. Sec. 363A.13).

The act was amended in 1993 to prohibit discrimination on the basis of “sexual orientation,” which was defined by the Minnesota Legislature as including those who “have or are perceived as having a self-image or identity not traditionally associated with their biological maleness or femaleness” (see Minn. Stat. Sec. 363A.03, Subd. 44.).

As Maul explains, this definition, “although somewhat confusing, clearly prohibits discrimination based on gender identity or gender expression. In fact, Minnesota was the first state to offer nondiscrimination protection to transgender and other gender-transgressive people. Our workshop will outline the details of this law, and how every transgender and gender-nonconforming person in Minnesota is protected from discrimination. Participants will walk away with knowledge and tools for educating their communities about transgender people and MHRA protections.

“Even with this, and some local protections for transgender people, we continue to face systemic discrimination based upon our identities, and, more likely, expressions of gender. Young people are especially vulnerable, due to their rightful reliance on families and institutions for support, which oftentimes outright reject or are complicit in the harassment and abuse of trans youth. Our workshop will discuss the barriers that transgender and gender-nonconforming youth face at home, school, and the workplace. We will provide participants with snapshots of experiences within the diverse trans community, and ways that they can become a better ally.”

The preceding evening, on October 3, you can catch STAGE LEFT (Straights and Gays for Equality—Listening, Entertaining, Facilitating, Teaching) for preconference festivities. Hailing from Austin, Minnesota, this collaborative effort between Riverland Community College’s Gay Straight Alliance and Austin’s community GLBT group called Q & A will present roughly an hour-and-a-half of music, storytelling, poetry, and discussion. Scenes from gay dramatic masterworks, Moises Kaufmann’s The Laramie Project and Lillian Hellman’s The Children’s Hour, also will be performed. Both are great choices for a general audience to taste a broad sense of 20th-Century GLBT cultural history.