You are fabulous creatures, each and
every one.
And I bless you: More Life.
The Great Work Begins.
—Prior in Tony Kushner’s Angels in America, Part Two: Perestroika 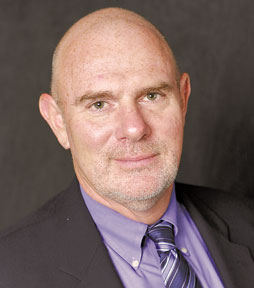 The Guthrie’s Kushner Celebration not only focuses on Tony Kushner’s remarkable plays, but also provides a forum for discussion on art and politics. The political highlight is the appearance of Lambda Legal Executive Director Kevin M. Cathcart in conversation at the Big G’s Dowling Studio.
We shot some heavy questions Cathcart’s way while he was riding on a bus—not ideal, but wouldn’t you know he’s right on target nonetheless. He has some great input about how and where we need to focus.

Minnesota has yet to legalize same-sex marriage. Do you have any suggestions for what we can do to make that a reality?

I think the most important first step in Minnesota is to continue and expand public education about equal marriage: why it is important to same-sex couples, how we are harmed without it, how no one is harmed with it, the distinction between civil marriage and religious ceremonies, etc. And we need to build coalitions with religious leaders and organizations who understand the difference and support us, with other civil rights organizations, etc.

Media is also key. Editorial board meetings, for example, led to great results in states like New Jersey and Iowa. We need local media. We can’t win equal marriage rights on basis of the GLBT community alone.

And all equal-marriage advocates should realize that the field has changed significantly with Iowa, Vermont, and Maine. So, this is a very good time to redouble these efforts. Iowa, especially, will have an impact on Minnesota, since it is next-door, and since numbers of Minnesota couples will go there to marry.

Some GLBT citizens worry that not enough attention is being paid to ultimately passing the Employment Non-Discrimination Act [ENDA]. You can still be fired for simply being gay or lesbian.

ENDA is absolutely critical for the many states without state antidiscrimination laws that cover GLBT people. It is also critical to have a federal victory of this stature. At Lambda Legal’s helpdesks, the largest number of calls we get, year after year, are about employment discrimination, and in many places, there is no legal recourse.

That said, I don’t think the marriage debates hurt ENDA. I believe they help. First, they keep gay people and our civil rights issues in front of people in ways that we could not get the media to do if we were talking mainly employment discrimination. Second, the marriage debate energizes lots of people, GLBT and not, who would not be as energized/involved on other issues. Third, I believe that pushing legislators—at all levels, state and federal—on marriage opens up space that makes it easier for them to vote for employment and other rights. So, I see the marriage debate/political movement as a net gain for other GLBT issues.

Do you foresee success in the reopened gays-in-the military debate?

As to the military, I am optimistic in the medium to long term, not in the short. While it is a big step forward to have an administration and President who are saying the right things, we have work to do to make this more of a short-term priority for the presidential administration, and to educate Congress, and elect more people to Congress who are better on this issue. If we as a community simply leave this to the President, it won’t happen for a long time.

Happily, the media is also interested in this issue, and we must keep pushing. It is an outrage that we are told by our own government that we are not fit to serve, and that the nation’s largest employer still kicks out talented and hard-working people because of their sexual orientation. We must keep pressure up so this will change.

As Americans, how far are we from gaining equality for same-sex couples in which one is an American citizen and one is not?

Hard to give a short answer to any of these, but especially to the binational couple question that requires immigration law reform. The Uniting All Families Act has been reintroduced in Congress, but all immigration reform continues to be both long overdue and contentious. And the Defense of Marriage Act [DOMA] stands in the way. Both legislative and legal challenges to DOMA are under way, but are in very early stages.

And this is where I have to put in my caveat for all the well-meaning people nationwide who want to rush into federal court, so the US Supreme Court can overturn DOMA, and binational couples can live here in peace. Great goal. Generally terrible strategy.

The Supreme Court is a major challenge for us. Obviously, we can win there. Look at Lambda Legal’s victory in Lawrence v. Texas. But look at the court, and count the votes, please. And replacing Justice Souter with what I hope will be a strong civil rights voice doesn’t shift the makeup of the court. The intersection of immigration and marriage is not where we are likely to see our next Supreme Court victory, and a loss can and will set us back years.

The antibullying campaign is becoming a great alliance between queers and nonqueers as a vital issue in common.

As we have seen from recent spate of bullying-related youth suicides, this work is critical. And this is an area where we could see federal law and funding breakthrough.

The growth of GSAs [Gay Straight Alliances] in recent years has made real differences in many schools, but we have a long way to go. Lambda Legal has been involved in litigation and advocacy, helping high school students form GSAs in three schools in the past month or so—in New York, Georgia, and Oregon. Yet, the bullying, and insufficient or damaging school responses to it, continue, and often in lower grades, where GSAs are much less likely to exist or help.

For many reasons, the GLBT movement has often been slow to come to the aid of young people. This is a key area where we need to push, as it could really make a difference.