Keeping Your Balls in One Baskit: An Interview with Eric Schwers

On the Runway Section

Staring at hot men in skimpy underwear…and being paid! Oh, my, now that does sound like a dream job. Earlier this year, Eric Schwers, who used to work on classified government assignments, decided it was time for a change. So, he bought up one of the hottest-growing male underwear fashion companies. Since 2001, Baskit has been called the original hip and comfortable men’s underwear company. Now, with Schwers onboard, it has a cheeky new look and an, um…expanding…base. 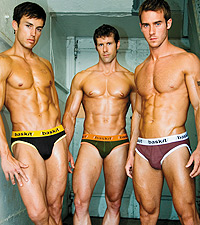 So, I have to ask, from protecting classified government information to protecting the family jewels. Why the drastic switch?

Yep, it’s pretty random, isn’t it? I worked for a US multinational consulting company. One of my clients was the Department of Homeland Security. It was a great job, but I missed working for myself, and I wanted to do something entirely different, so I started looking for business opportunities.

In late 2006, I was living in London, working for an equivalent UK government security agency, when I met the owners of Baskit. They were visiting a mutual friend, and we all went to dinner one night. At one point in the conversation, they started talking about Baskit. I had seen the underwear, and knew the brand. They mentioned wanting to sell the brand, and six months later, after some due diligence, I bought it.

When you bought the company, you moved the headquarters to Boulder, Colorado. Why the move?

I am from there, so it was a pretty easy decision. It has 300-plus days of sun, great skiing, perfect hiking out my back door. And we have some world-class companies: Crocs, Spyder Active Sports, Pearl Izumi, and Crispin Porter—one of the hottest ad agencies in the country—are located here. So, finding good, creative people is not difficult. Plus, have you seen the men in Boulder?

You’ve upgraded the construction of the briefs, improved the waistbands, and restyled the pouch since coming onboard, along with upgrading the cotton. Tell me about that?

Baskit has been around since 2001, and we’ve always been known for our great quality, but I wanted to really understand it, so when I took over the brand, we did a pretty thorough review of the line. I got the design team and an underwear fit model. Yes, that’s an actual job—if you’ve got the perfect body, package, etc., you can be an underwear fit model.

Anyway, we put every piece in our collection on the fit model, and just talked though it. How does it feel? Is it pinching? How does it look? You get the idea. It was one of the craziest days of my life thus far. I certainly never imagined I would spend several days in a boardroom looking at a guy in his underwear.

You’ve attempted to broaden Baskit’s audience. Who is your core audience as of now? Whom do you hope to grab as an audience?

That’s a tough one. Yes, I want the line to appeal to a larger cross section of men, but let’s face it: Gay men drive fashion and underwear in particular. Having said that, Baskit has a very solid straight following, and I wanted to increase our appeal to that segment, but it’s not as simple as that. You can design underwear for a certain type of guy, but it’s really hard to say who wears what.

For example, Baskit made a pink mesh jockstrap for several seasons. We could not keep it on the shelf. It sold out every time. Based on the stores that carry Baskit alone, it would be foolish to say that gay men nationwide bought up our entire stock of pink jocks. The reality of it is that you can never say who is wearing what, but if I had to guess—well, there were a lot of guys in three-piece suits wearing pink jocks to work.

There are a ton of underwear designers out there just for men. It has just exploded with popularity in recent years. What makes Baskit underwear stand out from the rest of the competition?

That is so true. You can’t swing a dead cat these days without hitting a new brand of underwear, but it’s really good for men to finally have better options in underwear.

Baskit is, and always has been, based on quality, fit, and feel. Our underwear is made with the highest quality cottons and elastics, and we strive to combine that with interesting designs and colors that look good, and make guys feel good. Look, no one wants boring underwear that pinches, sags, or just falls down around your ankles—well, not first thing in the morning, anyway!

You’ve just released the Lucky 7 swimwear line. Do you plan to continue expanding beyond underwear?

Yes, but I want to take it slow. We introduced swimwear this year, and it has been very successful so far, so we’ll make it again in 2009. We’re working on loungewear right now—shorts, pants—things you want to wear when you are hanging around the house on a lazy Sunday afternoon. As always, I want to make sure that we’re not just building more of the same stuff that is already out there—something a little more interesting.

Are we going to be able to purchase Baskit in the Minneapolis-St. Paul area anytime soon?

Absolutely! We’d certainly like to, er, support the men of the Twin Cities. We’re talking to a few stores right now, so it shouldn’t be long.

Anything else you’d like to add that I forgot to ask?

Well, until Baskit comes to a store near you, visit www.baskitwear.com to buy some hot new undies—’cause really, nothing is more embarrassing than being caught wearing the same pair twice.