John Barrowman has a definite “from-the-back-of-the-chorus” star moment. While waiting to study theater in London in the late 1980s, he learned that the producers of a revival of Anything Goes needed a new young lead—one who could do an American accent. Scottish by birth, he had spent most of his life living in the Midwest. The accent wasn’t an issue. So, instead of studying about theater in London, he was acting. 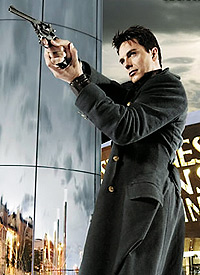 Two decades later, Barrowman has become a star of the West End, and a popular figure on British television. He even fulfilled a lifelong dream by being cast in the revival of Doctor Who. His character, the roguish and very out Captain Jack, was spun off into his own show, Torchwood. The cult success of the two shows over here has given Barrowman a new audience in the United States.

Watching all this was his family back in the Midwest. And when the chance came to tell his life story, Barrowman turned to his sister, Carole Barrowman, for help. An English Professor at Alverno College in Milwaukee, Wisconsin, and a correspondent for the Milwaukee Journal Sentinel, she was thrilled to be asked. The siblings collaborated on his autobiography, Anything Goes.

“One of the first things he said was, ‘If we are going to do it, Carole has to write it. I may have lived the life, but Carole is writing the book,” Carole recalls.

(John, who is promoting his most recent CD between seasons of Torchwood, was unavailable for an interview.)

It didn’t take long for the two to find some of the key ideas in the book.

“We did not want to write one of those ‘poor me’ books. We wanted to know that there are lots of us out here who have supportive families and partners. There are really family values,” Carole says.

Part of the ease is that John always has been very open about his professional and personal life with his family and fans.

“John’s life is pretty open. There wasn’t anything he told me that was shocking at all,” Carole explains.

That openness isn’t just about his career. John—who formalized his relationship with his partner, Scott Gill, during a civil partnership ceremony in 2006—has been an outspoken GLBT advocate, and was a host at London’s 2007 Pride celebration.

With the two siblings living on different continents, crafting the book took some coordination.

“When my semester finished here, I went to Cardiff, where he was filming Torchwood and Doctor Who, and stayed there off and on all summer. I literally shadowed him. We just talked, told stories, and laughed,” Carole relates.

“There were a lot of laughs,” Carole remembers. “We were driving back and forth between Cardiff and London, and he would tell me stories while we ate snacks in the car. I had to ask him to repeat a few stories, because all I could hear were the rustling of candy and sandwich wrappers, and us laughing.”

In the book, the narrative moves back and forth in time, following the Barrowman family life from the early days in Glasgow to their moving to Illinois to John’s professional career.

John shares plenty of personal anecdotes along the way, though Carole does not believe any of the stories told were “out of school”: “He is outspoken and energetic and funny. He hasn’t hid anything from the public, so no one cares what his private life might be.”

Not only did she work to form the narrative, but also Carole helped to fill in the blanks.

“Some of the stories have moved into family legend, like when my Dad threatened to put him in the garbage,” Carole shares.

Don’t call child protection. It wasn’t anything about John. The two older siblings didn’t appreciate the new baby, so he was making a point to them.

The book has been a big success since being published in Britain late last year. It has just been released in the United States.

Carole mixed in a different world, as she accompanied her brother on a book tour. They drew hundreds of fans at each spot, while in Cardiff, they had to cap the number at 1,000, as the throngs were blocking the street.