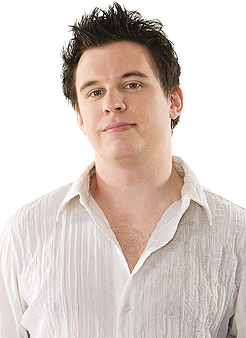 Fair or not, handsome actors comfortable with their physical bodies are often crucial to gay theater. That’s why you’ll see James Napoleon Stone in the title role.

Stone, who is hot, and “straight but not narrow,” has given terrific performances as the lead role of Max in Martin Sherman’s gay-holocaust classic Bent in both Minnesota and ultraconservative Idaho.

Fortunately, a straight actor playing gay roles is far-less-stigmatized than it was two decades ago. Stone is grateful to the hit Brokeback Mountain for helping to break that glass ceiling. Moreover, any serious straight actor knows the experience only can broaden his understanding of humanity and the acting craft.

When asked about the divide between straight and gay characters, Stone shares, “I don’t really think of it as a divide. I suppose it’s more about truthfully communicating the human experience to the best of my abilities.”

Jeffrey’s dilemma is that the AIDS epidemic seems to have eradicated any chance of enduring love. Hence, being HIV-negative and wary of contracting the virus, he swears off having sex, which also means denying his humanity. But as fate would have it, he falls in love with an HIV-positive man.

Stone observes, “Jeffrey has the common paranoia that surrounds someone in a relationship with a partner with HIV, because they’ve never been a part of that world. In that sense, Jeffrey is the lens through which we can learn about the truth about being in a relationship with someone with HIV. And through his experience, we can dispel our own fears, and learn the truth.”

Director Mary Cutler notes, “Rudnick deals with fear of intimacy, whether it comes from touch or conversation. Risking in our connections with people is essential to our humanity. ‘Safety’ and control only mean staying within the known or status quo, and out of growth paths. Jeffrey not only fears AIDS, he fears risking intimacy with a partner for whom he will have to show up, and be available for the ups and downs of living and living together in intimate awareness.”