There’s a whole lot more to the multitalented Jai Rodriguez than meets the cultured queer eye. Long before he became known as the culture expert on Bravo’s Queer Eye for the Straight Guy, he had performed on and off-Broadway, as well as on daytime television. But it was the worldwide exposure Queer Eye offered that opened the door for him to do a number of new things professionally, plus gave him a platform to find his own voice. 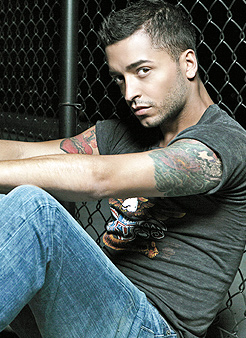 Rodriguez has had the great good fortune to see his career flourish because of who he is rather than hiding from it. Where some might be worried about being typecast, he is clearly comfortable in his own skin.

As Rodriguez says, “I have no problem playing someone close to who I am.”

This comfort perhaps has allowed Rodriguez to be as outspoken as he is with respect to the issue of equality, specifically calling the gay media to task.

Rodriguez recalls that marriage equality initially had been a real struggle, sharing, “I never saw myself married, so I had a hard time fighting for that, but when someone tells me I can’t, then that sparked a fire within me.”

Thinking back to Queer Eye, Rodriguez remembers, “It was the largest acting role I had, because it was really playing a character. It’s a caffeinated version of who we were. It kind of did a disservice to who I really was, [and made it] challenging for me to sit on Oprah’s couch and talk about dance—what I wasn’t really an expert about.”

Rodriguez explains that most of the tips he offered on Queer Eye were taught to him in the moment, remarking, “I had more in common with the straight guy.”

Not surprisingly, people still identify Rodriguez from his role on Queer Eye, stopping him on the street to ask him how they look. He confides it has been a bit of a struggle to reeducate the world that he had a substantial career before Queer Eye.

Rodriguez relates, “I’ve gotten roles that aren’t the guy from Queer Eye. Once I did, people were pleasantly surprised.”

In addition to his acting, Rodriguez has found success as a recording artist. So, while it might sound like he has done it all, it’s abundantly clear he is just getting warmed up. Since Queer Eye went off the air in 2007, he has appeared on or hosted a number of reality television shows. Despite winning an Emmy for hosting a reality show, he really doesn’t see himself as a reality star.

Rodriguez shows his versatility as a performer in his most recent film, Oy Vey, My Son is Gay, screening at FilmOut San Diego. The movie, which features John Lloyd Young as Rodriguez’s love interest, is about a mother in-law’s journey of acceptance.

Rodriguez comments, “It’s a family film—what it is like for a parent with the uncertainty about a son being gay.”

With hundreds of episodes of reality television under his belt, Rodriguez found that working on the film gave him greater confidence as a performer, and was a great opportunity to speak up for himself: “I learned a lot on how to be more assertive on film sets.”

The highlight for Rodriguez, though, was recording a song with legendary songwriter Desmond Child as part of the film.

Rodriguez will be returning to scripted TV as a regular on HMS (Harvard Medical School), a promising new series about a group of young medical students. It’s a contender to premiere this fall on the CW network. Rodriguez plays Carlos Gutierrez, a first-year med student who overcomes significant hurdles, which inspire him to get through medical school. Portraying a substantive gay character, he is looking forward to the opportunity to infuse more authenticity into the role. The series has Hayden Panettiere, of Heroes fame, as co-executive producer.

HMS comes on the heels of an appearance by Rodriguez as a reporter in the recent notorious Lady Gaga “Telephone” music video. A last-minute casting change won him the part.

As Rodriquez recounts, “I didn’t know it was going to be racy! I got a call literally at 11 the morning of the shoot. Because I do a lot of hosting, it has the same feel.”

With no script, Rodriguez injected a little humor into his character.

Despite Rodriguez’s many accomplishments, it is clear that his first love is performing onstage in front of a live audience.

As Rodriguez puts it, “That’s where I’m truly in my moment.”