Here in Minnesota, we enjoy two things above all else.

The first is summer, of course. We are a bunch of hermits who poke our heads out in early March, and realize it’s time to end our alcohol-induced winter hibernation. We then spend the next five months outside every chance we can, even if it means calling in sick to work for the umpteenth doctor appointment in two months. 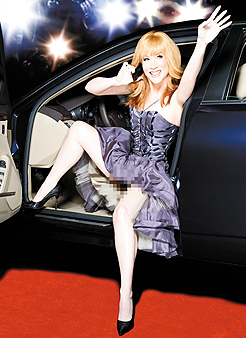 Our second great asset is Congresswoman Michele Bachmann. She adds just the right amount of crazy to make living in Minnesota an interesting experience. Finding someone who actually voted for her not once but twice is like discovering a leprechaun with his pot of gold. No one has found it, but somewhere, it does exist. Nothing says “Welcome to Minnesota” better than this politician who has a knack for saying the most off-the-wall things on a regular basis. That’s why we love her, and why Kathy Griffin is excited to do a show in Minneapolis that prominently will feature her Bachmann run-in.

The ever-poplar D List actress and queen of comedy is returning for a second round of celebrity-bashing—and, of course, telling us all about meeting Bachmann in Washington, DC.

Griffin says, “I got invited to Washington to talk about Don’t Ask, Don’t Tell, and I had a run-in with Michele Bachmann. She’s ‘really intelligent’”

[Note: I was instructed to make sure the foregoing was in quotes, so no one actually would think Griffin was serious, or said she’d be “fucked.”]

Griffin continues, “One of her minions flip-cammed me, and if you’re going to flip-cam me, and you aren’t going to ask me, you better come to fucking play.”

After we both enjoyed a good chuckle, Griffin went on, “So, there I am with crazy-ass Michele Bachmann and one of her minions. I will tell you that word spread around the media event, and everyone else was actually asking if I said that. And I will say that an unnamed person from another news media outlet did say she was ‘special.’”

Griffin is saving what she actually said to Bachmann for her show at the Orpheum in Minneapolis, because we Minnesotans would enjoy it a lot more than the people in California who may not know about our “special” Congresswoman.

Speaking of crazy and special, we quickly transitioned from Bachmann to meth and Sarah Palin. Who knew the two actually went together?

Griffin recounts, “It’s interesting that we are talking about meth, because on one episode of the D List, I go to Wasilla, Alaska, and it’s the meth capital. Not sure if it’s just Alaska or the United States, but what if Sarah Plain is a meth queen?”

Interesting indeed. It would explain so much.

Griffin adds, “My fantasy would be Sarah Palin on Dog the Bounty Hunter, and Dog’s wife thinks Sarah wanted Dog, and she’d kick her ass.”

Though that fantasy will have to be put on the back burner, the D List is loaded with Palin’s favorite baby daddy, Levi Johnston.

According to Griffin, “[Johnston’s Playgirl spread] came up quick. We talked about his Johnson quite a bit, but the D List is action-packed.

“I am proud to get the first pap smear on TV in history. I feel in my little D List way, I was able to one-up Katie Couric when she got her colonoscopy on The Today Show. I’m in a bikini and stripper shoes. I did pixilate it for the gays. I understand you have no desire to see a close-up of my vagina.

“As for the rest of Season 6 of My Life on the D List, you get to see behind-the-scenes on [Law & Order: Special Victims Unit]. I fucking love SVU,” Griffin screams. “Episode One of the D List, you get to really see what happens. And the best part is, you get your Chris Meloni, Mariska, and you see me going for an acting lesson at Minnelli’s fucking apartment. I’m in love. I’m a normal gay man. I’m in love with her. Oh, and I get kicked out of everything.”

When asked about her other great guest-starring—as a witch in Shrek Forever After—Griffin shares, “OMG, I did the photo shoot in People Magazine. It’s so A List. I have three lines in Shrek. Not sure what the fuck I was doing at the photo shoot. And someone is standing next to me, and I’m going to make you Google it.”

Don’t fret: If you watch Griffin talking about things on television, she promises you wouldn’t hear them at the show.

Griffin relates, “Once you see it on TV, the live show will be all-new. And my next special is June 28, and it’s called Kathy Griffin Does the Bible Belt. It was taped in Knoxville [Tennessee]. I actually thought about the special. The gays made the drive from all over, and when you play a market like Knoxville, I was actually getting Tweets saying, ‘I’m going to come see the show, and I hope I don’t get fired for that.’ There are some parts of the country where you’re still going to get your ass kicked for being gay, but the audience was very enthusiastic.”

As for the North Dakota gays, Griffin states, “I have not played Fargo. Follow my Twaughts on twitter. If I can do a double in Biloxi, I will be coming to your town. I’m on tour all year-round. Just keep checking kathygriffin.com.”

Though the show isn’t until the end of June, and the special doesn’t air until then as well, don’t worry about getting your Kathy Griffin fix. She mentioned that her Official Book Club Selection: A Memoir According to Kathy Griffin already has come out. It’s so titled because she’s running a campaign to get on The Oprah Winfrey Show, and have the tome become an official Oprah book club selection.

Griffin remarks, “Oprah isn’t letting me on the show. She seems to be taking her time asking me to be on the show. For some reason, I seem to not get as close as I want to. Gail probably has a taser.”

Be sure not to miss Griffin’s newest season, as Bravo has been slow on releasing past ones on DVD.

As Griffin puts it, “They put out Season One, and then they put out Season Two. I have no backend. They don’t ask me to do any press. I learn myself by reading my Twitter. One of my gays sent me a text: ‘What the fuck is up with you on the cover [of Season Two]? It’s you standing in the middle of a freeway.’ Bravo would love nothing more than to have me stand in a freeway, and kill me. Very A List.”