Recalling some recent Outwoods-hosted outdoor adventures, Vega says, “We went out in the woods, and took pictures at camp sites. We’ve also done some cycling.”
According to its Web site, Outwoods “is a vehicle for the gay, lesbian, bisexual, and transgendered (GLBT) community and their friends in Minnesota and adjacent states to publicize quality, enjoyable, noncompetitve, outdoor recreational activities.” 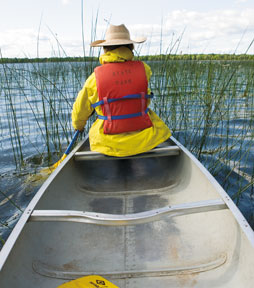 Vega adds, “Outwoods is a way to connect with other members of the GLBT community. There is something for anyone who wants to join.”
Outwoods is observing its 20th anniversary this year. The group’s longevity is no accident. It’s the direct result of a laserlike focus brought to brightest gleam by virtue of the core values:

• To bring members of this community together in a sharing, supportive, respectful, and cooperative atmosphere.• To foster a spirit of enjoyment and appreciation for the natural environment, and its conservation and protection.• To encourage safety and responsibility in the outdoors.
• To serve as an education and informational resource concerning all the organization’s values.

Each outdoor adventure employs these principles to some degree.

Any member is allowed to propose a trip, and when it comes to be, he or she serves as that journey’s alpha, leading the other members through the twists and turns of the adventure.

Recent events included two different urban camera safaris. Gayly enough, each was themed: One was “Word on the Street,” and the other was “Yellow.” Evening paddles and strolls have appeared in the recent schedule…happily, not at the same time.

Sometimes, the expression of who you are can manifest differently where open-air adventuring is concerned, according to Ryan Anderson, Advertising Manager for outdoor equipment and clothing retailer Hoigaard’s.

Anderson muses, “‘Outdoor Adventure’ definitely means a lot of different things to different people. For me, I tend to think about things like riding my bike along the trails in both the Twin Cities and Northern Minnesota, and stopping for lunch and a local beer along the way.”
And if Anderson is without wheels? No problem.

Other forms of adventuring include, in Anderson’s words, “biking and camping in Minnesota’s great state parks and forests, and snowboarding both on the hills in the Midwest and in the mountains outside of Minnesota. I love that I don’t have to travel in order to do these things, yet the option still exists.”

Anderson, whose passion is as obvious as his expertise, shares, “I’m certainly no Grizzly Adams, but I’d like to think that I can handle the outdoors without complaining too much. I work at Hoigaard’s, so I’d say that enjoying the outdoors is required!”

Sometimes, the unadventurous inside world bleeds into adventuring in abstract ways—in the form of attitudes.

As Anderson explains, “I think people often think of people who enjoy the outdoors as hippies and health nuts. Is that good or bad? I’m not really sure. I’ve never thought of myself as either, and while granola isn’t part of my vernacular, it might be fitting, at least in a comical sense, for some outdoor enthusiasts.”

Vega, who also has brushed up against the prejudiced expectations of the more urbancentric, relates, “They don’t picture gay men and women—or anyone else in the GLBT community—doing outdoor stuff. When they find out about Outwoods, they’re kind of taken aback. They don’t think it’s real.”

And the dependable tilting of the Earth has no effect on these outdoor stalwarts…unless it’s to steel the resolve of true adventurers.
Commenting on seasonal shifts and how they affect aspirant adventurers, Anderson observes, “It definitely varies from person to person, though in Minnesota, there seems to be a lot of overlap. I originally got into snowboarding after skateboarding for years.”

Anderson, whose experience is secondhand as well as firsthand, points out, “A lot of my friends who ski—both downhill and cross country—are avid cyclists. Others enjoy canoeing and kayaking, or camping. I think our common ideal is to get outside, and have fun, regardless of weather—within reason, of course!”

Vega corroborates Anderson’s observations: “Definitely, in wintertime, there’s less to do in the outdoors, because, you know, it’s frigid cold. We in Outwoods do go out, though. There are picture-taking events. Some of us go out for cross-country skiing and snowboarding—stuff like that.”

That said, its fleeting nature makes summer seem like Minnesota’s most precious season—the time when self-expression is its most profound.

Anderson offers this simple suggestion: “Play outside. Summer is short. Enjoy it!”