The letters in the acronym GLBT have been known to be limiting. For instance, being lesbian or bisexual, though central to one’s life, is not the sum total of an individual. That’s why Identities Explored: A Celebration of Art from the GLBT Community at Hennes Art Company has taken a more expansive and in-depth view into the nature of who we are. Company owner Greg Hennes opened his gallery just a year ago, and it has already become quite a hip destination.

Hennes says, “We knew we wanted to have a show that supported the GLBT community in some way. We wanted an event that would showcase the talents of GLBT artists more than just GLBT themes.” 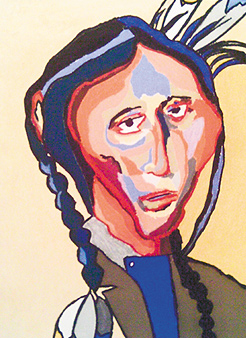 Curator Larry Miller shares, “First, I wanted a wide variety of art, media, and perspective to represent people across the spectrums of the Kinsey Scale, gender and gender identity, relationship status, and society in general. Second, I wanted working professional artists to be in the show. I wanted the work to come from the art community, as well as the GLBT community.”

While searching, Miller visited Rachel Orman’s studio, thinking he’d be drawn to her esteemed female nudes. Instead, he was attracted to work that depicted three individuals of different genders, and felt it was a great choice for celebrating bisexual communities.

Heavy Metal and trans icon Venus DeMars, who will DJ the Opening Night Reception on June 24, will also exhibit her spectrally luminous bic pen drawings on archival notebook drawing paper. She says. “I draw them during my down times while on tour, or whenever. Kind of a visual diary.”

Both David Cook’s book Lemonade for the Lawnboy and his dolls are part of the exhibit. James Michael Lawrence’s Marriage, which juxtaposes tradition with newly won freedom, is inspired by his Iowa marriage to Peter Michael Wilson. Matthew Wettlaufer’s touching Two Soldiers captures tenderness between military men.

Christine Stark addresses mixed ancestry. She says her work reflects “the racist inheritance my grandmothers received, which was passed down to me through silence and ambivalence. And they are about the difficulties I experience when people—mostly outside the Native community—assume I’m not Native because of how I look, or don’t believe me to be a ‘real’ Indian.”

Connie M. Beckers, AKA The Goddess of Glass, has worked in the Tiffany style of stained glass for more than 15 years. Check out her round fused glass plate, Cyclone Glass, and a new piece titled Clearly Abstract #5. She is a 2009 winner of a Minneapolis Arts Commission Award for Community Involvement in Public Art.