A couple of weeks ago, I was headed home from a particularly uneventful night at the club. I had stopped at a red light a few blocks from my apartment, when a large white SUV rumbled up from behind me. Out the passenger window, I glanced down, only to notice the word “hybrid” emblazoned in large, graphic letters across the lower portion of the SUV’s body. 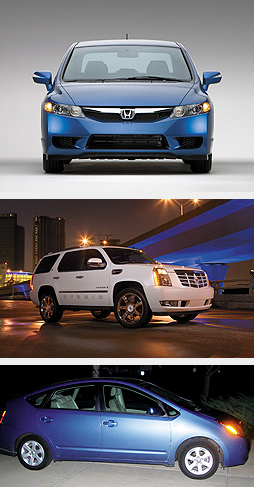 It was as if every issue in the current political climate was idling next to me: economy, offshore drilling, human rights. As the light turned green, the SUV sped ahead, revealing additional hybrid badging large enough to be seen from halfway across the city.

After all, what good is saving the planet if no one can see you doing it? A catty thought to be sure, but consider that our favorite eco-ride, the Prius, didn’t become popular until its unique and unmistakable redesign course, built on its predecessor, the dull, yet economical, Toyota Echo.

I had heard of these greener full-size SUVs, but really hadn’t encountered one until that evening. (“Yes, it only gets 12 mpg, but they’re 12 greener miles!”) Now, a hybrid that’s moving in the right direction. Or is it?

Something’s to be said for pursuing greener alternatives, but at what point does it become a pursuit to the wrong end? I decided to do some more sleuthing to see if these new green giants on the road really are worth the investment.

I headed to a local Cadillac dealership to get my hands on some information, and a shot behind the wheel of one of these land yachts. Immediately, I ran into trouble. It seems that the hybrids aren’t due out until November. The salesman, however, did agree to show me a standard model and answer questions.

Specifically, I wanted to know price and mileage. The standard nonhybrid Escalade, which starts just under $57,000, can exceed $70,000 with all the extras. The two-wheel drive model gets an EPA-estimated 12 mpg city and 19 mpg highway, with the all-wheel drive model getting 12 mpg and 18 mpg, respectively.

The hybrid model, though not yet officially priced, is expected to add approximately $11,000 on top of the equally equipped nonhybrid model. The hybrid’s mpg is equally mysterious, but is expected to be around 18 mpg city and 22 mpg highway. The term favored is “improvement.”

Though the SUV hybrid is kind of a conundrum, at least the idea is there. Even though it lacks even the basic mpg of the average car, fret not: Two hybrids out there will make going green a way of life.

The first, and most popular, is, of course, the Toyota Prius. Yes, that’s the one—the ugliest car ever made! But even that wasn’t enough to stop people from buying these cars faster than they could be made. And Toyota corrected the problem with a The Swan makeover.

Starting at a cool $22,000, the Prius is the man when it comes to hybrids. With a surprisingly high city 48 mpg versus highway 45 mpg, this car means fueling up once a month rather than twice a week.

However, if you’re really cool and green, you can join what has been called the “hypermilers,” who claim near 100 mpg, and talk about cross-country trips on a single tank of gas. This is the car I envision when I think green, but good luck trying to find one—they leave the lot as fast as they’re delivered.

Following close behind (probably because the Prius wasn’t available) is the Honda Civic Hybrid. Yeah, the car that used to be as cool as the Geo Metro has made a Mariah Carey-style comeback. A little more pricey at $23,500, and going up to nearly $27,000, the Civic may be more mainstream. It does lack a few things, namely, the options that its nonhybrid sibling has—like, say, the ability to have a sunroof.

But, no need to worry. With all that green you’re saving, you can go to the beach more often. With a 40 city mpg and 45 highway mpg matching the Prius, the Civic is just as cool when it comes to showing off your greenness.

Whether you want to be cool and green—or just green—a hybrid option is out there for you. Even the Lexus LS 600h L comes in hybrid form for the small price of $105,000.