Humana Festival of New American Plays: Slasher Is Not So Minnesota Nice

Attending the Humana Festival of New American Plays is a theater junkie’s version of Fashion Week in Paris (without the snobbery). The annual event, presented by Actors Theatre of Louisville, features marathon performances of new scripts by the Tennessee Williams and Eugene O’Neills of tomorrow before they hit Broadway (or, more likely, a theater near you.) 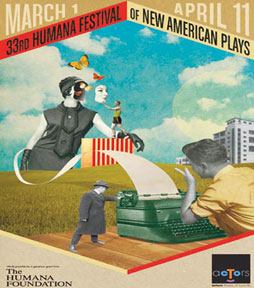 Directors from all across the nation—hey, the globe—are here to jostle for first rights, and civilians devoutly clasp tickets for the sheer rush of catching the best of the best before they become household names.

No scripts tossed over the proverbial transom make the cut. Playwrights must apply through their agents. From these submissions, 800 scripts are considered, then winnowed to 100 from which Actors Theatre Artistic Director Mark Morris selects the final eight. Past hit plays that debuted here include The Gin Game, On Golden Pond, Crimes of the Heart, Agnes of God, and Dinner with Friends—three of which went on to win Pulitzer Prizes. Minnesota’s own Kevin Kling first launched his iconic 21C at Humana.

This year, it’s Allison Moore’s turn to represent Minneapolis with Slasher, her darkly humorous, mirthfully macabre examination of women’s roles in slasher films. Do they exploit women, as her uberfeminist mother rants? Or, as her daughter, Sheena, retorts when offered a contract, “It cannot be exploitation when they are paying me this much money.”

Moore studied theater at Southern Methodist University in her native Texas. Roommates interested her in coming to Minneapolis, where she wrote a script for Hidden Theater. She also met her husband, a strong motive to stick around. But an equally strong attraction was our city’s unique Playwrights’ Center, where she has been involved, in her words, “on every level, from core member to fellow. It’s everything you could ask for as a playwright to help you develop your work, giving it an actual production with time, space, and paid actors. They make it all possible.” And they’ve fostered her successful application for fellowships awarded by the Bush, Jerome, and McKnight Foundations.

An earlier work, American Klepto, was staged as part of Illusion Theater’s Fresh Ink Series in 2006. Moore also has had commissions by the Guthrie, including Cow Town, written for high school students to perform, and a piece for the theater’s BFA graduate company in 2006.

Nicole Rosenberg, who plays the heroine in Slasher, was a Guthrie BFA grad, by the way. Jeffrey Mosser of Minneapolis recently moved to Louisville when chosen as a member of this year’s apprentice company—but he keeps up with hometown news by reading Lavender online, he told me. Peter Michael Goetz, a frequent Guthrie performer, played the patriarch in another new play, Absalom, by Zoe Kazan (yes, those Kazans).

What does a slot at Humana mean for Moore and her fellows? She says, “Very few places get plays produced outside New York for so many people to see, and lots of artistic directors come here to see what’s out there. It gives them a firsthand experience, rather than simply reading a script. Plus, you have actual conversations, and establish face-to-face relationships, rather than simply through emails.”

It has paid off. Several theater companies have expressed interest in adding Slasher to next year’s season. Meanwhile, Moore has prepared an adaptation of Willa Cather’s My Antonia for Illusion (see page 32).