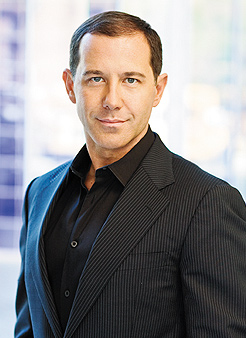 Lavender recently interviewed Solmonese about his five years at HRC, the Target controversy, and other issues.

You have been President of the Human Rights Campaign since 2005. What do you see as the organization’s major accomplishments over the past five years?

We have accomplished so much over the past five years.

I think the single most important accomplishment was when the Matthew Shepherd and James Byrd Jr. Hate Crimes Prevention Act was signed into law by President Obama in 2009 after 11 years of hard advocacy work. I’ll never forget being with Dennis and Judy Shepherd when we got the news. It was the highlight of my career, and a truly touching day.

Other noteworthy accomplishments are helping to elect fair-minded candidates to public office across the country; launching the Healthcare Equality Index, which rates the nation’s hospitals on a set of baseline standards of patient care for LGBT Americans; participating in the first-ever Congressional hearing exclusively on the issue of workplace discrimination against transgender Americans; and taking the lead on lobbying on Capitol Hill for the statutory repeal of the prohibition on HIV-positive people entering the country for travel or immigration, and working to ensure that Department of Health and Human Services regulations were changed.

In addition, we launched our “Welcoming Schools” program, a comprehensive resource that facilitates the creation of fully inclusive, respectful, and supportive elementary school environments for all students and their families. This program includes students from LGBT-headed families, and is being piloted in 11 schools across the country, including several in Minnesota.

As well, we’ve brought over 500 clergy members to lobby on Capitol Hill on behalf of LGBT equality. This was the first time that many elected officials had met with clergy who were decidedly proequality, and for many, this was instrumental in their decision to support hate crimes legislation.

There are so many accomplishments, but there is a lot more work to be done.

Recently, the US District Court in California ruled Proposition 8 unconstitutional. What does HRC plan to do as the decision goes to the 9th US Circuit Court of Appeals and possibly to the United States Supreme Court?

The American Foundation for Equal Rights (AFER) has done a stellar job fighting Prop 8 in court. Few moments have been as exciting as the moment when we heard what we’ve known all along—that denying marriage equality is unconstitutional. As the nation’s largest LGBT civil rights organization, we will lend our voice and our resources to support AFER, as LGBT Americans continue on the path to full marriage equality. While we ultimately expect to win this battle, we understand there are many hurdles ahead, and our work as is far from over. We will keep our members and supporters engaged in the fight, and we will support AFER in every way we can.

Target Corporation and Best Buy received a 100 percent rating on the most recent HRC Corporate Equality Index (CIE). How does HRC determine these ratings?

The CEI measures the workplace practices of corporate America. HRC rates companies on a scale from 0 to 100, based on several criteria that include the status of nondiscrimination policies, transgender protections, employee benefits, and diversity training, among others. The rating also evaluates a company’s external engagement with the LGBT community in the form of advertising and philanthropy, for example. HRC also investigates ongoing litigation or shareholder actions that impact its policies, as well as any donations to organizations whose primary mission is antiequality.

Target and Best Buy have historically had model workplace policies for LGBT employees. That’s why they have received 100 percent for the past few years.

Given the HRC 100 percent ratings of Target and Best Buy, and the controversy regarding their donations to MN Forward, does a possible flaw exist in HRC’s rating system? Is HRC working to resolve this possible flaw?

The simple facts that make this case unique are that these contributions were enormous, the Minnesota Governor’s race is key to marriage equality, and both companies aggressively markets themselves to the LGBT community.

The American political landscape has changed considerably over the past eight months since the Supreme Court decided the Citizens United case. Corporations can now give unlimited amounts of shareholder cash to certain political committees. While the ramifications of Citizens United remain to be seen, many believe that its impact on social justice movements—ours included—will not be good.

The CEI is at a crossroads. Should it factor in political contributions, and if so, how in an objective way that does not ignore the reality that corporations give to candidates of both political parties for business purposes? That’s the question that we are studying.

It’s important to point out that corporate America has largely led the way on policies for LGBT people over the past decade. While we still don’t have a federal workplace nondiscrimination law, 84 percent of the Fortune 500 have nondiscrimination policies in place that include sexual orientation, and 42 percent include sexual orientation and gender identity. And while most states do not yet legally recognize our relationships, 57 percent of the Fortune 500 offer domestic-partnership benefits to same-sex couples.

What is HRC’s position on the current controversy regarding the Target and Best Buy donations to MN Forward?

We are extremely disappointed in both Target and Best Buy. Both companies, and specifically Target, market themselves aggressively to the LGBT community. Same-sex couples in Minnesota are denied the equality given to other couples in marriage, and state leaders are poised to right that inequity very soon. Because the next Governor will likely have the opportunity to either sign or veto marriage-equality legislation in the North Star State, this election is critical. The fact that both companies contributed to an organization that supports a vehemently antigay candidate closely associated with a Christian rock band that advocates death and violence to gay people is unacceptable.

HRC has advocated that Target and Best Buy donate to a proequality organization an amount comparable to what they gave to MN Forward. Is this the best policy, or will it alienate another segment of Target and Best Buy’s employee and customer base?

The vast majority of Americans are fair-minded, and will understand that we are merely asking for parity. It’s been our position that Target and Best Buy must correct the harm they caused by making a like contribution to a group that supports proequality candidates or causes.

Has Target or Best Buy, or its foundations or executives, contributed directly to HRC? If so, how much?

Our work on the ground across the country, and our partnerships with other LGBT and veterans’ organizations, have gotten us far. The US House of Representatives and the Senate Armed Services Committee have both voted to repeal DADT. Now, it’s up to the full Senate.

We have an exciting new campaign under way in partnership with Servicemembers Legal Defense Network called Countdown 2010. We are focused on 10 states with key lawmakers whose votes on DADT repeal are critical.

We are mobilizing grassroots supporters of equality across the country through in-district meetings, as well as a call-in and e-mail campaign. I encourage everyone to go to countdown2010.hrc.org to participate.

As HRC marks its 30th anniversary this year, what is the future direction of the organization?

We will keep working to achieve full equality for LGBT Americans in all aspects of their lives to include their relationships, their workplaces, and communities. In addition to changing the laws of our nation, it’s equally important to change hearts and minds. In the coming years, our work will continue to empower people of faith to speak out, press for transgender health coverage in corporate America, and ensure that LGBT people have the freedom to parent if they so choose. We have a big agenda in front of us full of opportunities.