Hailed on the cover of Rolling Stone Magazine—with her image placed right between George Clooney and Al Gore—as one of “41 icons on what’s next in music, tech, and saving the world,” 25-year-old Missy Higgins has emerged as a vocalist of significance. 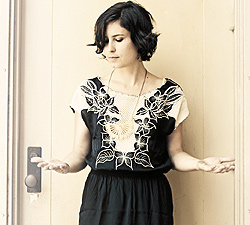 The Melbourne, Australia, native’s two acclaimed, award-winning, hit albums, The Sound of White and On a Clear Night, showcase her soulfully sensitive style.

Fortunately, none of Higgins’s loved ones were affected by the recent drought-induced fires in Australia, an effect of the climate change that has alarmed this ecofriendly-activist musician.

I spoke with Higgins about her music and her view of sexuality—one that definitely has gotten the attention of her growing fan base.

Your lyrics often probe into someone’s identity getting totally lost in the identity of another person.

I think I have a bit of an obsession with identity. I’ve always had a battle to maintain a strong sense of identity and individuality in or during my relationships—romantic or working relationships. I feel like it’s very important to hold onto the essence of who you are, and not get too caught up in other people’s priorities or other people’s opinions. So, I guess that crosses from work to love.

What has influenced your music?

I get influenced by different things from day to day, depending on the day that I wrote certain songs. The first female singers that influenced me were the old jazz singers—Ella Fitzgerald, Nina Simone, Sarah Vaughan—although I don’t think that’s very obvious in my music these days. When I first started writing songs, I was very influenced by Sarah McLachlan and a couple of Australian bands, The Waifs and Something for Kate. I was 15 at the time.

You blossomed very young, and you’ve sustained and expanded since then. How have you done so?

I think that comes from being more of a live artist than a recording artist. I feel like these days, that’s how you really maintain a fan base. I started playing live shows when I was about 14. It’s how I got my start in Australia, doing it in a very grassroots way.

You don’t like to talk about yourself in terms of sexual orientation, but you’ve talked about the fluidity of sexuality.

I understand that it’s human to want to pigeonhole things, because that’s how we work. We put things in boxes, and we can feel more comfortable about where they fit around us, and how close we let ourselves come to them. And that’s how we judge ourselves—by our distance from these boxes. So, I understand that, but it’s also quite frustrating when you feel as though you neatly fit into one of these boxes, and you feel that probably no one really does.

Maybe it’s just a lack of creativity in the minds of others to think that they could be going outside those realms that most people fall into. And there’s also the fear that if people admit that, then there are no boundaries. Then, what does that say about them? And they’re scared to face that aspect—that part of themselves. It’s not something clear-cut in my view. And the more I talk to people about it, the more I realize that if you are open about it yourself, the more comfortable they are in opening up about it themselves. It’s really nice to see someone suddenly drop their guard, and say maybe you’re right.