“Hedwig and the Angry Inch”: Gender Ambiguity and the true Nature of Love

A decade after Hedwig and the Angry Inch won the Obie and the Outer Critics Circle Awards for Best Off-Broadway Musical, Jungle Theater is reviving the scathing rock sensation, penned by John Cameron Mitchell, with music and lyrics by Stephen Trask. 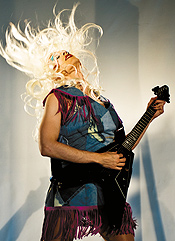 The show’s “angry inch” refers to the title character’s botched sex (gender)-change operation, which was agreed to out of Hedwig’s love for Luther, an older latent-homo American GI who could be an avenue of rescue from Communist East Berlin. Of course, same-sex couples cannot marry, and so, Hedwig as a man could not be married into US citizenship like hetero couples. Hence, the surgery.

Unfortunately, once stateside, Hedwig is abandoned by Luther, and then tricked by yet another male, the much younger Tommy. Stealing Hedwig’s music, he turns her tunes into star-making hits, which douses what could have been a hot career for her as a glam/punk singer-songwriter.

The musical itself is centered on Hedwig’s stalking—or shadowing, if you prefer—Tommy’s global tour. As he plays big-name venues, obsessive Hedwig books herself into nearby dives. That obsessiveness, which we often call “love,” drives the story.

For example, the show’s tune “The Origins of Love” derives from an idea of two people stuck together, back to back, who are ruptured apart, and must seek the other out to find wholeness and true romantic partnership. Hedwig is separated from her biological gender, as well as from male love objects Luther and Tommy, who did her wrong. This brings to mind the Taoist concept of Yin and Yang, along with Carl Jung’s idea of animus and anima, though Trask’s lyrics are drawn from homosexual Greek philosopher Plato’s Symposium.

Director-designer Joel Sass, who wonders if love itself a byproduct of this separation, says, “When you’re in paradise, I guess—and who the fuck knows what that is—the idea of being torn asunder and separated, and now being filled with the desire to try and find that missing half, the action of doing that is this thing that we’ve decided to call ‘love.’ I think the show very sagely acknowledges and celebrates that, and that’s a really beautiful thing.

“But it’s a painful process, too. And it’s by no means something that results in a guarantee of partnership. Sometimes, you’ve got to try on a bunch of different gloves in order to find that. I think the show makes it clear that it includes not just trying to find your other half, but also finding the thing that fits yourself—the notion of self-love and acceptance, where you are in the world and who you are, how you self-define yourself.”

Jairus Abts, who plays Hedwig, admits, “How automatically I looked at it, and took the romantic, sort of cut-and-dried definition of love. But really, the word ‘love’ is steeped in all these negative words like ‘cold’ and ‘dark.’ It made me think that love itself is more complex than what people think about, and not necessarily all that great.”

Moreover, Abts, who is no stranger to transsexual roles—having played Frank ‘N’ Furter in Sass’s 2004 University of Minnesota production of The Rocky Horror Show—points out, “On face value, you’d think that they would be similar, because they both wear heels and makeup, and identify with the more feminine gender. But the role is a lot different, because it’s kind of living in this weird purgatory world where it’s not male or female, and even goes outside the realm of what trangenderism really means. I’m still struggling with [what] people who are actually transgender believe transgender to be. But what I’ve heard so far is, it’s something [that’s a part of] you that you have early on that you identify with the other gender that you are not, to put it roughly.

“And Hedwig really isn’t that. He has his gender taken away from him, and never really acquires the gender that was supposed to be given to him. So, that’s been kind of tricky to do. There are moments in the show when I definitely am playing a woman, and then really feeling the feminine aspects—feeling actually the weight of the breast on my chest and the lack of a penis, and what not. But there are moments when Ann says I get man on here—where the real, primal, deep, innate masculinity is still there underneath this feminine artifice.”

The Ann whom Abts refers to is Ann Michels, a woman who plays Yitzhak, a man who yearns for Hedwig’s love. She also portrayed Yitzhak in the 2002 Outward Spiral production of Hedwig that was so popular, its run was extended.

Michels confesses, “I always have been a bit of a tomboy.”