He Made It Work

When the Season Six of Project Runway, the fashion reality-television show phenomenon, hit the airwaves this September, avid fans were more than just excited—they were relieved. A drawn-out legal battle between the Bravo and Lifetime TV networks left many biting their nails, wondering when and where they’d be able to hear Tim Gunn’s comforting mechanical tone, Michael Kors’s backhanded compliments, and Heidi Klum’s adorable accent. 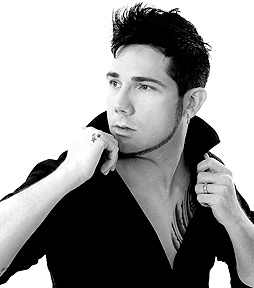 When the dust settled, Lifetime won the legal battle, the show had a new backdrop of Los Angeles (where Kors’s orange skin finally fit in), and the season already was a year old. This left the contestants lock-lipped for a very long time.

Of the 16 contestants who started off the season, Minnesotans were delighted to find out that not one but two from the Land of 10,000 Lakes were representing them.

Christopher Straub, from Shakopee, made it not only onto the show, but also all the way to the last challenge before getting Klum’s trademark “auf.” For the 30-year-old, home-taught fashion designer, Project Runway was truly an opportunity of a lifetime.

To say Straub was raring to flex his sewing needles on the show is an understatement. An avid Project Runway viewer since the first season, he even got braces to close a small gap in his teeth right before heading to Los Angeles.

Straub shares, “I wasn’t starstruck with the judges. They’re there to do a job and to critique your work, and so, I respected them for that.”

However, Straub was dying to meet Gunn, the show’s resident mentor and voice of reason.

Straub relates, “He’s the most personable with the designers, because he’s right there, nurturing them as they go.”

At the outset of the show, Straub seemed like he had everything under control, recounting, “Before Project Runway, I was, like, the king of the five-hour dress. I could make something in a very short amount of time.”

Straub came out of the gate swinging, winning the very first challenge, along with the hearts and attention of the fans. Though he may have been celebrating, he knew he had an uphill battle coming up.

As Straub explains, “When given two days to create something, and given a budget more than I’ve ever had before on one garment, I thought I really needed to take it to the next level.”

Straub’s idea of ratcheting things up a notch got him into trouble a couple of times. Toward the end of the show, he found himself lower and lower on the judge’s lists, but still managed to make it to the end. Though he always stayed true to his perspective as a designer, he had to deal with his share of harsh comments from the judges.

For Straub, the show revealed a side of the fashion industry he hadn’t anticipated.

In Straub’s words, “It’s art, and it’s your own perception, and how you perceive fashion and color and volume and shape and all that stuff was to me this kind of sacred thing. So, when I hear people kind of being put down for their art, it really kind of affected me. I wasn’t really expecting that at all.”

One of the criticisms Straub received was a lack of a formal education, which may have impeded his execution and decision-making. Even though he did not go to fashion school, he did not see it as a disadvantage by any means.

Straub notes, “Because I learned it by myself, I sort of came up with different ways that might not have been taught, so I just have a different eye for things sometimes, especially in terms of craftsmanship.”

When all was said and done, Straub was being true to himself as a designer, but the judges weren’t having it.

So, would Straub have done anything differently?

Straub insists, “Of course. I mean, really, every challenge, you can look back, and say ‘What could I have done to make that more successful,’ but can I go back, and change it? No. Do I think about it regularly? All the time.”

This show certainly didn’t make Straub a fashion designer. It just showcased what he already had been doing for years. He has his own underwear line, Cricket Syndicate; his own T-shirt and accessory line; and his own fashion garment line.

So, whom is Straub designing for? Who is a typical customer?

According to Straub, “It’s someone still younger, stylish, looking for something unique, something with a little excitement to his or her clothes. Even if it’s not, like, a crazy blazer or a crazy pair of jeans; like, a great wallet or a belt; or, like, a duffle bag for travel, luggage—that’s the kind of customer. I’m also looking for that girl that’s a little younger than me who really just wants to find something cute and funky, and show off to her friends.”

What the show did was give Straub exposure the likes of which would have been extremely difficult in a place like the Twin Cities. But he has no plans of leaving Minnesota anytime soon to join the fashion rat race.

Straub comments, “Right now, I’m working on some accessories, and working on some pieces with overseas manufacturers, and most people in New York or LA are working with it. So, there’s no need for me to go to some unfamiliar place in order to do exactly what I’m doing right this second.”

That’s not to say it will remain this way forever.

Straub muses, “If I get an opportunity with a designer, or with a retailer to design for them, of course, I’m going to take a look at that, but as of right now, I would choose to stay in Minnesota, given the opportunity.”

For the time being, Straub just is continuing to do what he does best: create fun clothes.

As Straub points out, “I’m designing so many pieces around what have I been missing in the marketplace.”

Straub also is getting used to his newfound fame: “There’s everything from moms coming up to you, and going, ‘My daughter loves your show, and can she get in a picture with you?’ to, like, people grabbing your arm, and screaming in your face, and everything in between.”

Even the crazies appear.

Straub remarks, “People have asked me to come to funerals for their family. People have requested sexual encounters. It’s really, like, sometimes the most bizarre things. Or, like, little girls inviting me to their birthday party, and I thought it would be really funny if, like me, a 30-year-old guy showed up to a 14-year-old’s birthday party. Yeah, Dad is going to love that.”

Above all else, Straub has done an excellent job of keeping his eye on his goal of being a fashion designer, and keeping a level head about his whole experience. If he’d give one piece of advice to aspiring fashion designers, it is something he practiced every day on the show and every day of his life: “Be true to your designs, and stand behind what you do. If you’re really a true designer, you should be able to stand behind and fight for your design.”

See Christopher Straub at the Minneapolis Home & Garden Show on Feb 25, in the Lavender Lounge. Go to homeandgardenshow.com for more information.