You may get the feeling that a queer sensibility is at work in the glorious new comedy Hamlet 2, with its brutally funny look at paternal rejection, its awareness of homoromantic desire in high school, and its subversion of the standard operating perception of Christ the Savior. That surely has much to do with openly gay director Andrew Fleming, who has cowritten the script with Pam Brady. 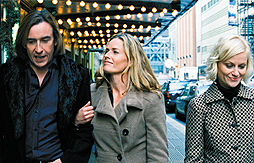 However, great scripts and great directors require brilliant actors to make their intentions shine and soar. Indeed, Fleming and Brady found that in what must be the lead actor of their dreams, Steve Coogan. His turn as high school drama teacher Dana Marschz recalls the comic genius of such paragons as Charlie Chaplin and Jack Lemmon. Coogan, whose portrayal is worthy of an Oscar nod, already may have the Golden Globe for Best Actor in a Comedy sewn up. The unpredictability of his performance comes out of a depth of understanding of what it is to be human, plus ingenious inventiveness.

I recently chatted with Coogan about the way Jesus, parental rejection, and gayness play out in Hamlet 2.

Hamlet 2 is hysterically funny, and has a gleeful way of pushing lots of buttons, but I suspect the way it looks at Jesus Christ could really spark controversy.

On the face of it, they might find it offensive. But in context, at first, you think the play that’s put on in the movie is going to be a real mess. But somehow, there’s some sort of beauty in these people trying to make sense of it. It hits some deep place within.

The notion that attaching the word “sexy” to him is denigrating is itself an issue. But why is that? Look at the iconography of Jesus Christ through the last 2000 years. Those images! Michelangelo was gay, and the images he paints have homoerotic qualities. It’s absolutely clear. It’s one of those things that is taboo.

I can understand how there might be the inference of the “Sexy Jesus” in this film somehow trying to be adolescent and provocative for the sake of it. And it’s not! It’s about something. The comedy is edgy. It takes risks. Quite life-affirming. Quite warm.

And healing, too. There’s this way in which the film looks into the problem of rejection. Both the Jesus myth and the Hamlet story, which has essentially become a myth, are fundamental stories of a father’s rejection. That’s something a lot of queer folks can identify with. You feel that director Andy Fleming’s personality seems to come through the film.

Some people say that if you’re laughing at something, you’re somehow trivializing it. But you can laugh at things, and laugh at subject matter that’s very serious and matters to you. Whenever I’m going through some sort of crisis in my life, comedy is a way of exorcising demons. When you laugh at it, you somehow “own” the problem.

Andy would say you don’t have to try to be funny at this moment. You really have to feel the rejection there—and really feel it—feel the sadness, and sort of respect the character. If it was just I playing this goofball guy who is out of his depth, and it was a series of gags, it wouldn’t have the emotional truth it does. As a director, he was really specific about that.

I had shivers down my spine at the end. Nothing is more satisfying than when a comedy does that. Like actress Lily Tomlin and the late film director Robert Altman at their best. I was touched by Skylar Astin’s performance as teacher’s pet. I got his sense that he has a crush on your character. It’s beautifully understated. No stereotypes.

We talked about it. We wanted to do it in a way that brought the balance between finding the comedy in it and finding the humanity in it—not letting the comedy overwhelm the humanity, so that you’re not seeing real people there. The best comedy moments are sad and poignant and funny all at the same time.

An example is something we came up with Skylar and myself: a bit where I bash the balloon in his face almost like a penis, and he laughs at the same time. But clearly, he’s slightly overwhelmed and discombobulated by the whole thing—trying to deal with it. And you see this kind of look on his face with fear and longing and being ridiculous all at the same time—all these emotions crashing through his head, in a really playful way. It’s the closest he’s ever going to get to me. It’s really sad and funny, all rolled into one.