Last year, Tony Kushner was the Guthrie Theater’s featured contemporary playwright. This year, it’s David Henry Hwang, whose 1988 Best Play Tony-winner, the gender-bending groundbreaker M. Butterfly, is about to open. His 2008 Pulitzer-finalist Yellow Face, featuring Randy Reyes, sold out at the Big G in February as a coproduction with Theater Mu. Hwang generally is regarded as the best Asian-American playwright ever. 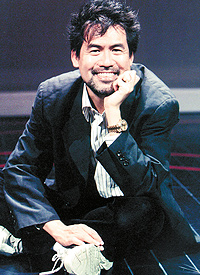 I recently spoke with Hwang about M. Butterfly.

M. Butterfly is a perfect blend of the proverbially “well-written” play, and at the same time a radical reassessment of gender, sexuality, race, and the West’s colonial legacy imposed on the East. How did this play come about?

When I heard the story on which M. Butterfly is based. The idea of a French diplomat who had an affair for 20 years with a Chinese actress who turned out to be (A) a spy and (B) a man in drag. The way in which that story just kind of hit me and fascinated me, without my knowing on any conscious level in those early phases that that story would inherently encompass sexism, racism, imperialism, gender reevaluation, and notions of racial and sexual identity being fluid. There is so much in that story itself. It was just a question of being able to unpack what I think this anecdote carried within it inherently.

How could Gallimard not know about Song being a man for so long?

The play argues that it’s essentially a case of self-delusion, in the same way, in a more typical sense, that a spouse knows the other is cheating, and chooses not to know. In this case, Gallimard is so in love with the idea of living the Madame Butterfly scenario that he chooses to ignore anything which would contradict that fact, including the fact that his Madame Butterfly has a penis. The play argues that it’s basically self-delusion conditioned by the sort of racist template of Madame Butterfly and the seductiveness of that fantasy.

Now, in terms of the mechanics of the situation, which the play really doesn’t get into, there’s a woman named Joyce Wadler who wrote a book called Liaison about the actual case, and she went and spent a lot of time with the real principals, and interviewed them. I guess there was some issue of Shi Pei Pu being able to fold his penis into his testicles, so that’s one way it could be done physically. But the point is not really about that. It’s more about the state of mind.

Now, interestingly, there has always been a school of thought about Boursicot having been a closeted gay guy, and I feel that doesn’t actually make sense in terms of the real character, because at the time Boursicot was arrested, he was out. He was living with a different man, so it would have been much easier for him to have said, “I had an affair with a man, and at the time, I was young, and wanted to believe that Shi Pei Pu was actually a woman, and not a man.” But no. Instead, when he got arrested, he continued to protest, and assert that Shi Pei Pu was a woman and not a man, which made him look ridiculous. So, even in terms of the actual case, the idea that Boursicot was just trying to cover the up the fact that he was gay doesn’t hold water.

It’s intriguing how M. Butterfly presages what we’ve finally come to see nowadays: that many men who identify as straight are attracted physically and emotionally to those who are anatomically men, but who vividly evoke feminine traits. We see this a lot more in this Internet age. When M. Butterfly premiered in 1988, at that time, I would have fallen into my “he’s not facing his homosexuality” spiel. But I think about how sexology pioneer Alfred Kinsey looked to insects, saw amazing variety, and pondered why sexuality couldn’t be that varied. I think we are still caught up in the binary: gay versus straight.

And there’s not just gay, straight, or bisexual, either. The three categories we use now are kind of reductionist, because, as you say, the range of human sexuality is much more complex and fluid. One of my big arguments, particularly in Yellow Face, has to do with the fluidity of race. We construct these categories of black, white, Asian—whatever—and, in fact, there’s a huge amount of fluidity, and it’s convenient most of the time for us not to recognize that. And similarly, I feel that we’re at just that particular point of social history where categories of sexuality are straight, gay, and kind of bisexual. But those are constructs as well, and they’re attempts to kind of categorize experience, i.e., human sexuality, which has a myriad of manifestations and facets. It’s politically convenient sometimes, and sometimes it’s just lazy to reduce them to three categories.

What’s it like for you revisiting M. Butterfly now?

When it opened in ’88, the West was still pretty secure in the position that it’s held for the past 300 or 400 years. Now, just 22 years later, the West is considerably more insecure about its power relationships, particularly in relation to China. The play kind of posits that the West has always considered itself masculine, and looked at the East as feminine. A powerful East—is there a cultural template or stereotype that that fits into? And I think that there probably is. I think that with women, there is the Madame Butterfly or the Lotus Blossom submissive Asian woman. But there is also the Dragon Lady, and I wonder to what degree our perception of the rising China is influenced by the template of the Dragon Lady.

The treatment of the Dalai Lama reinforces that view. There was a feeling that President Obama was too reluctant in finally greeting the Dalai Lama.

There are definite problems with Chinese society. It combines two of my least favorite things, thought control and rampant capitalism, in the same culture. As China starts to feel its oats as an economic and political power, it seems like the repression of dissidents is growing more intense, because there is less fear of condemnation by the international community. For that reason, and because the Dalai Lama is a legitimate leader, it seems [that it was right] for President Obama to meet him.

I’ve taught scene study from your Obie-winning play Golden Child. My own reaction to its foot-binding aspect was: “how barbaric.” Yet, some of my students saw it differently.

I think it’s really interesting to look at tradition versus change in the context of somebody else’s society, because tradition in the context of one’s own society always feels like: well, that’s the normal thing, and that’s how people have always done it, and why would you change this? But you put it in somebody else’s culture, and it becomes something like foot biding. Our instinct is to go, “No! They shouldn’t be foot binding!” So, hopefully, it problematizes the easy reactions we have to tradition versus change.

Your view of the interplay between Asia and America is widely admired. As a boy growing up in the Southwest during the Vietnam War, I recall more of a sense that that war was deemed racist. There seems to be less of an awareness about the racist component in American wars nowadays.

I think that’s true. I feel there’s a degree to which we have a kind of template or stereotype that’s gotten into our heads as a result of cultural influences or media about what different races are like. Then, there’s the degrees to which those influence our policy makers and the decisions made on a national level. A connection sometimes gets made, but it’s easier to make them in retrospect, so that at the current moment, of course, we’re largely dealing with Middle Eastern issues.

One of the things that Yellow Face argues is that at the end of the 20th Century, we were starting to get into a period where America needed a new Big Enemy, and China was going to be the new Big Enemy. So, a lot of the Donorgate and Wen Ho Lee scandals were kind of the opening shots of that particular war that we would have begun with China. Then, 9/11 happened, and then all of a sudden, it was: “Oh, wait!” Well, we’ve now got a Big Enemy. He’s over there in the Middle East, so we went into a useless war.

For which we borrowed hundreds of billions of dollars from China.

To finance that war. So, the ironies abound.