Guthrie Theater Artistic Director Joe Dowling has won the admiration of the GLBT community for his no-nonsense inclusion of GLBT subject matter in programming, overall inclusion of local artists of various sexual orientations and backgrounds, and broad variety of plays of stellar quality. This fall, he is making his American debut as actor after a 21-year hiatus.

Dowling was a major stage actor in Ireland before, in his words, “the directing took over.”

I spoke with Dowling a few days before his splendid opening-night performance in fellow Irishman and friend Brian Friel’s 1979 classic Faith Healer. 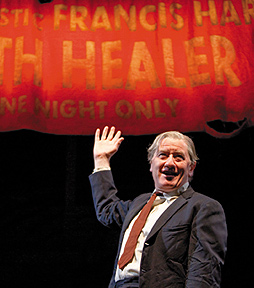 Do you see Hardy, the Faith Healer, as a fraudulent fellow, or are we supposed to figure that out for ourselves?

I think you’re supposed to figure that out for yourself, but I don’t think he is. I think he has a fear that he might be, because he has this gift to heal people, but he has no idea where it comes from, and he has no idea when it’s going to come or how. So, he’s constantly living in a world where there’s a chance where it might happen today, but it might not.

And he deals with that in his own particular way, but I don’t think you can describe him as a phony. It’s real. The way the play is written, we find out a great deal, not only about him, but about the people that he lives with, and the effects that this talent or this gift has on their lives as much as on his life.

So, the play works on one level of the straightforward story, and then on another level, it’s kind of a metaphor for the creative artist—somebody who never is quite sure of whether their talent is going to work for them today—like an actor going out onstage.

When I trained as an actor in London in the ’80s, the British students at my school were really into Brian Friel.

I think particularly British and Irish students would have found Brian so interesting, because his dialogue is always very naturalistic. You absolutely believe that the people are who they say they are. There’s no kind of remove or any kind of Brechtian sense.

Faith Healer is a series of monologues. The characters are defined by their isolation in many ways—even from one of his earliest plays, Philadelphia, Here I Come!, where he broke up the central character into two: the private and the public.

He always experiments with form, and he’s still doing it, even in his 80s. So, that’s, I think, one of the reasons that people, particularly acting students, warm to him, because there’s a challenge always. When you speak his words, they feel real, they feel natural, and you don’t have to sort of twist your head around trying to say it so it feels like it’s real. He really does write great dialogue.

The new Guthrie facility has become a magnet for the GLBT community, with the recent Kushner Celebration and The Laramie Project: 10 Years Later. You’ve made it a welcome place for diverse views and marginalized people. There are still standard Western classics, but you’ve integrated many non-Caucasian plays, and are now facilitating an international collaboration between artists with disabilities.

So, I don’t see it as “let’s include the marginalized”—that doesn’t ever occur to me. What occurs to me is: How does this reflect back to the community a sense of wholeness about this community. GLBT is integral to this community, as is any other part of it. So, I have a belief that if theater isn’t about explaining and clarifying what humanity is, it has no purpose at all.