Greta and Bella: Traveling with Legally Blonde: The Musical

Legally Blonde was a hit 2001 movie that became a hit 2007 musical earning seven Tony nominations, including Best Score. Its national tour, hitting the boards at the Ordway, is one of the most pet-friendly ever. The show features Chihuahuas and bulldogs, but the romantic leads also bring on tour their own pooches, which don’t perform in the show at all. Typically, national touring casts fly from city to city, but with this one, various cast and crew members go with the show in their own vehicles, so they can take their beloved canines with them. 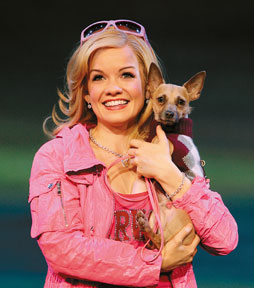 Becky Gulsvig, who plays the starring role of Elle, is accompanied on the tour by her husband, Tyler, and their darling, Greta.

A native of Moorhead, Minnesota, Gulsvig says, “We have our own car, and we drive from city to city, and that’s how we make it easier, because our dog is a golden retriever, and she wouldn’t be able to fly. I can’t imagine being on the road, and not having our dog with us. The family’s on the road, and we’re all here. It’s a lot of work, but it’s worth it to have her along.”
D.B. Bonds, who plays Emmett, and his real-life wife, Shannon, have a dog named Bella.

She’s a terrier mix rescue dog that tour members have nicknamed The Fraggle, because she looks like a Fraggle from Fraggle Rock, Jim Henson’s ’80s kids TV series.

Bonds feels the tour has been “really good for Bella, because she’s become a lot more comfortable around other people and other dogs. She was a rescue [dog], and she was very skittish around other people and other dogs. She still is not the most outgoing dog in the world, but I think it probably helped her become more well-adjusted moving to a different hotel, seeing different people all the time. It provides a little more work for Shannon and me, but when we get to a new place, she’s very excited and keyed-up, so we make sure that when we get to a new place, we don’t leave her right away. We stay with her for at least a few hours in the hotel, and make sure that’s she’s calm, and knows that this will be her home for the next week or two weeks, or whatever.”

Bonds observes that Greta is much better adjusted than Bella, but the two have become close friends.

As Bonds relates, “A lot of times, when we go to the shows, both of our spouses sell merchandise at the show. So, we’re all four gone during show time, and a lot of times, Greta and Bella will stay in the hotel room together while we’re gone.”

Both couples walk the dogs themselves, but when there’s a matinee and evening performance on both weekends, they’ll switch off if the hotel is a long distance from the theater. Becky and Tyler will take the dogs on a walk together between Saturday shows, and D.B. and Shannon between Sunday shows.

Obviously, they use hotels that are pet-friendly. Other cast and crew also bring their pets. The show itself employs two Chihuahuas and two bulldogs that stay with their handlers.

Gulsvig shares that bonding with these dogs was part of the rehearsal process: “On the road, we become one big family, and it’s especially important when there’s a dog involved, because there’s a lot of new crew in each city, new faces, new theater, new noises, and they need to know that they are safe.”

Trivia: Lavender readers will appreciate that Legally Blonde has a charming gay twist within the plot line.