When it named the Broadway incarnation of Grease “#1 musical of the year” in 2007, Time Magazine added, “Grease is getting a new generation excited about the theatre again. But, you don’t have to be an impressionable 13-year-old to get a kick out of Kathleen Marshall’s exuberant and winning new revival—it’s the one that I want.” 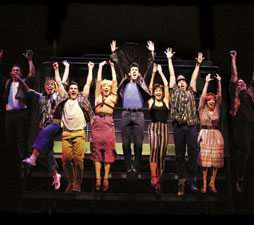 The stage version of Grease features songs from the classic 1978 movie, including “Sandy,” “Hopelessly Devoted to You,” “Grease,” and “You’re the One That I Want”—all for the first time in the Broadway production. These are just a few of the added bonuses to the original Jim Jacobs/Warren Casey songs “Summer Nights,” “Greased Lightnin’,” and “We Go Together.”

Directed and choreographed by two-time Tony Award-winner Marshall, Grease is the story of new girl Sandy Dumbrowski; bad boy Danny Zuko; and the love they share in the world of 1970s rock ’n’ roll. It’s a celebration of growin’ up, cruisin’ with friends, and goin’ steady.

Direct from Broadway, the biggest movie musical ever comes to Hennepin Stages in Minneapolis January 2-4.

Select performances feature American Idol Season Five winner Taylor Hicks as Teen Angel. Eric Schneider, who plays Danny, made his Broadway debut in Jersey Boys, and also has been seen in Altar Boyz and The Full Monty. Emily Padgett, who portrays Sandy, made her Broadway debut in Grease, and also appeared on Broadway in Legally Blonde.

Best-known for the 1978 movie version, Grease produced one of the best-selling sound tracks in history, famous for two John Travolta/Olivia Newton-John duets, “You’re The One That I Want” and “Summer Nights.” It’s also the highest-grossing movie musical of all time.

See this spectacular musical in all its glory. You’ll fall in love with motorcycles and bad boys in leather jackets all over again.