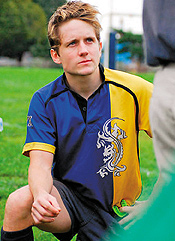 That’s a favorite post-match song sung by members of the Gotham Knights. They’re a rugby team. A gay rugby team. “We’re Off To See the Wizard,” it ain’t.

James Bain, President of the New York City-based club, says, “We’re not just a ‘gay’ team that’s happy to play. This isn’t a social organization. We’re here to win. We train hard, and we play hard. We measure our success the same way any other rugby team does. We’re competitive in our union [league]. We mostly play straight teams. And now, we’re beating clubs who used to kill us.”

The Gotham Knights have made major strides since their formation less than seven years ago. Having reached the finals of a couple of tournaments, they had their first winning season last spring.

They compete in gay competitions, and their sponsors include the Eagle—voted “Best Leather Bar” by New York Magazine—but if you’re a gay man looking to hook up with hot jocks in a porn-fantasy locker room, the Gotham Knights are not your game.

Bain is a typical Knights rugger. Six years ago, he was a 20-year-old student at New York University. Far from his native Texas, where he captained the wrestling team, he was searching for an athletic outlet—though he was not sure what.

“I didn’t fit in with the gay crowd at NYU,” Bain recalls. “I tried club sports, but it wasn’t a great school for that. I wanted a contact team sport, so when I saw an e-mail about rugby, I gave it a shot.”

Bain found a group of like-minded men. They were physically tough. They trained and played hard. After practices and games, they liked to, in his words, “drink beer, and shoot the shit.”

As Bain relates without regret, “We’ve lost a lot of people over the years. They wanted a casual social group, without toughness. This isn’t about that. We know what we want, and that’s to win. I’m pretty goal-oriented. So are most of the guys on the team.”

Like many teammates, Bain is self-directed on and off the field. A strategy consultant with IBM by day, he is equally diligent honing his rugby skills in the evening and on weekends.

Denying a “gay sensibility” to the Gotham Knights, Bain states, “We like to hit people, and drink beer in bars. That’s how we express our identity.”

Yet the Knights are not just another rugby team that plays hard and parties harder. The club’s mission is to increase diversity within the sport, refute negative stereotypes, and create a welcoming and encouraging learning environment for new ruggers. That sets them apart from most straight clubs.

“We’re more willing to teach people,” Bain shares. “We accept all levels of players. A lot of clubs don’t. That opens us up to different types of people—gay, bisexual, and straight.”

Though the majority of team members are gay or bi, the team does not ask—or tell.

In 2000, the Gotham Knights were just a dream. Businessman Mark Bingham, who had heard of gay teams like the San Francisco Fog and Washington Renegades, met with local rugby player Scott Glaessgen to form a New York counterpart. Those plans were shattered on September 11, 2001, when terrorists hijacked United Airlines Flight 93. Bingham, a passenger on the plane, was one of the heroes who diverted it from its intended target of Washington, DC, dying as it plunged to the ground in rural Pennsylvania.

Bingham’s death and dedication inspired Glaessgen and others to form the Knights. The team colors of blue and gold honor Bingham’s college squad, the University of California at Berkeley.

In the spring of 2002, the Knights participated in the inaugural Mark Bingham Cup. In 2006, they proudly hosted the event.

Bingham’s legacy—his sexuality had nothing to do with his heroism—is expressed in the rugby world, too.

Bain explains, “Our opponents are very accepting of us. The atmosphere at our matches is very positive. Afterwards, we drink together at gay bars and straight bars. They either warm up to us, or they’ve been accepting from the beginning.”

As for the verses they sing there—well, “rugby songs were really sexual long before we came along,” Bain remarks.

If the ocean was whiskey, and I was a duck
I’d swim to the bottom, and drink it all up
But the ocean’s not whisky, and I’m not a duck
So let’s get back to Gotham, and have a good f—.