Barely slowing down, my tires squeal as I turn into the hospital’s emergency parking lot. I uselessly hold my arm across Kent in the passenger seat. I help him out of the car, and into the ER. His normally strong, tall, 6’3” frame seems fragile. He’s quiet. I fear a heart attack, given his symptoms. Hoping to accompany him to the exam room, I’m suddenly stopped at the border. 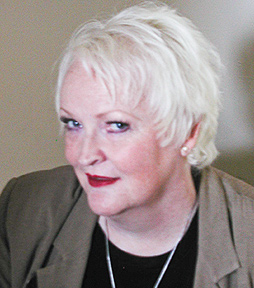 I was hearing an exaggerated German voice demanding to see my pa-pers. I didn’t have any.

I’m not married to Kent. He’s gay. I’m straight. Both single. For a solid 27 years, we have been intricately involved in one another’s angst and glory. Our friendship has outlasted our various romantic dalliances with others. We’re on high frequency—we get together once or more weekly. He’s the first one I call in times of crisis, or something cool, like a new job or lover. He does the same. We’re each other’s emergency contacts and beneficiaries.

We share intimacy without sex. Sex has many alter egos. It’s exalted at times (it consummates a marriage). Yet, the absence of it seems to score higher morality points (the story of the Virgin Birth; abstaining until marriage; the vow of chastity by nuns, priests, and other spiritual leaders). Sexlessness equals purity. Kent and I are pure—at least with one another. Pure, but not legitimate.

I realize that being stopped at the border puts me in the relationship ghetto with many other friendships and committed same-sex couples, but it stings despite the good company.

I wanted to shout that Kent and I have been knocking around since 1982, when we met on the dance floor at the Gay 90’s in Downtown Minneapolis—as cliché as that may sound. Both of us were skinny. With my boyfriend home for the evening, I was out dancing with my friend, Andrew. Kent saw me, and weaved through the sweaty bodies. He reached me, and exclaimed, “If I were straight, I’d date somebody just like you. I love your dress.” It was a killer dress. Later on, Andrew left separately.

Kent and I closed the 90’s that night, and holed up at his place until morning. A liter of vodka (served neat, as I recall) and a couple packs of cigarettes were involved. We sat cross-legged on the small futon in his smoky bedroom, drunkenly discussing the meaning of Life until sunrise.

We were in our mid-20s, from conservative small towns, and fresh out of college. His big decisions were: When and how should I come out? How will my rural family respond? My questions were different: Do I really want to marry my live-in boyfriend? Have babies? Attend law school?

I don’t shout that, of course. I explain with equal parts defiance and vulnerability that I am his friend. My eyes water when I say “friend.”

A short, freakishly efficient nurse rolls Kent away from me, her facial ticks keeping time with the spokes of the wheels. She pushes him toward the labyrinth of triage rooms, which are scored by floor-length curtains hanging from ceiling tracks. Each time someone walks into a curtain, it balloons into a profile of Alfred Hitchcock. The smell of rubbing alcohol hangs in the air like the curtains.

The nurse yells over her shoulder that they will get him situated, and update me. I nod like a bobble head, and make my way to the waiting room.

Kent’s housemate, Natalie (name changed for privacy), is traveling through India. I hope it won’t be necessary to locate her. They’ve lived together platonically since 1975—34 years—longer than many marriages. They met at Oral Roberts University in Tulsa, Oklahoma. Not a friendly place for young gay men, or strong, intelligent women in the ’70s. They shielded one another. Still do.

Natalie and I are friends through Kent. I know they always will live together. They are committed in the way the religious-right think impossible.

For distraction, I picture the three of us in conventional terms. Kent and Natalie would be common-law spouses in many states. Unfortunately, that makes me the mistress. I sigh.

Rabbi Shmuley Boteach, author of The Kosher Sutra: Eight Sacred Secrets for Reigniting Desire and Restoring Passion for Life, says that one-third of all long-term marriages are sexless. This makes platonic Natalie and Kent even more married-like. She wouldn’t have gotten in either.

With the average length of marriages shortening, as well as pervasive infidelity—virtual and actual—and the rate of multiple divorces increasing alarmingly, why is straight marriage still the gold standard?

Why does the expression have to be committed same-sex couples, anyway? Married straights can be as uncommitted, adulterous, platonic, or dysfunctional as they please. All they need is a license for relationship legitimacy.

I blindly turn the pages of a Sports Illustrated in time to my racing thoughts, and watch people work the courtesy phones. Others send texts with dueling thumbs. Some talk covertly on their cells.

“I don’t know anything yet.”
“Call Mary right away.”
“He just dropped to the floor while we were getting ready.”

All the funerals Kent and I have been to race through my head in a mental slideshow. This scares me. I rewind to Amsterdam—the little girl standing in front of the Van Gogh Museum spoke several languages to us, until she found the only one we understood. In perfect English, she asked us the time. Kent and I shouted the time in unison to assure her, or ourselves, that we weren’t complete idiots.

A doctor walks through the waiting room. This is it. They’ve sent the big gun to tell me that Kent needs surgery. Or worse. I rise to meet him. He walks past me, and out the door. I drop to my chair with my unread magazine.

I force my thoughts elsewhere. Kent regularly digs for dinosaurs in the Badlands. Occasionally, I accompany him. On our last trip, he patiently dug in the extreme heat for hours, with me a few buttes away, cooking dinner over an open fire. Like June Cleaver to husband Ward, I asked him how the digging was going. He went on about scapulas, the Tyrannosaurus, and Cretaceous period. I handed him a tin plate piled with lightly dressed arugula and pesto fettuccini. He doesn’t tell me that they normally just eat pop tarts and trail mix.

I think about all our times in Chicago, listening to the blues, and frequently talking to the players between sets. How many times has he listened to my most recent breakup story? I’m touched when I think about all the times he has slipped me money when I had little. I love that he always lets me drive—as near as the Chatterbox Pub in our hood, or as far as Kansas. And he doesn’t complain, as I swear at some dumb-ass going too slow.

I pace the waiting room with these images, while I open and close a torn Newsweek without seeing the print.

Considering that Kent has a primary relationship with both Natalie and me, he’s a bit of a polygamist. I mean, not a real one—he doesn’t have the right pa-pers. And, well, he’s gay He does need to keep our birthdays straight, and remember who likes books—and who likes jewelry.

I picture us as Mormons of the Fundamentalist Church of the Latter Day Saints, awaiting the next caravan to the compound in Eldorado, Texas. That would make Natalie and me sister-wives, and Kent our very own felonious leader, Warren Jeffs. Natalie and I would have to wear long cotton dresses in Easter-egg colors, with small white buttons sewn tightly all the way up our necks and down our wrists—leaving no room for my cigars or condoms. Between the two of us, we’re a baker’s dozen short of kids. On the up side, I could bake bread and cook everyday. I would like that. I wonder whether they eat much Ethiopian injera. Oh, God, I’d have to slaughter pigs, and make sausage out of them. I begin to panic. I mean, how many other vegetarians live at the compound?

With thoughts spinning into bizarro-world territory, I look at the clock in the waiting room. Only 20 minutes have passed. I slump into a chair with the same old Newsweek, now rolled as tightly as I am.

I launch toward the nurse, hurling the magazine to the empty chair. All calm veneer gone, along with the frightening images of pink and blue fundamental dresses, sister-wives, and sausage casings. My tears bust loose.

“Your friend wants you.”
My friend.
The other gold standard.

“He’s going to be just fine. To be on the safe side, we’re going to admit him for further tests and observation. Follow me.”

My mouth smiles, my eyes cry.