Lives of the Rich and Famous? Admit it, we’re all voyeurs. And peeping on posh lifestyles doesn’t get any better than in Germany, where scads of royal castles offer show-and-tell.

Who were these patrician palace dwellers? Well, their family trees are a dense forest of Georges, Fredericks, and Wilhelms too complicated for my peasant’s mind to master, but it doesn’t matter: Simply enjoy. 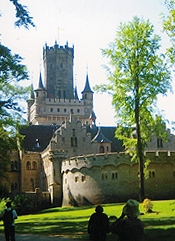 Six degrees of separation? Not even. British Queen Victoria’s Albert was of German stock. Before and after, Germany’s royal children entered into marriages across Europe that make the merger of Delta and Northwest look like penny-ante players.

Hannover is a grand place to start. Dipping our toes into the royal waters, or at least into the fountain’s spray, we strolled the gorgeous Herrenhaus Gardens skirting the royal summer residence, where Handel’s water music debuted, and Peter the Great put on his dancing shoes.

What would they think of the newest addition, I wonder? An anguished French artist has constructed a riveting, almost-psychedelic grotto, ablaze with tiles, mirrors, and ceramic eyeballs.

But that’s Hannover for you—and why I’ll never tire of it. The city boasts 500 forward outdoor artworks, from bus stops that the Walker would envy to the collection at its own museum of modern art, the Sprenger, where Picassos are mere table stakes. It overlooks a city lake where joggers and bikers go crazy. Just up the street, connected by a Red Thread painted on the pavement that unites the city’s cultural sites, the Disney-like Town Hall boasts a lake of its own. Beer gardens’ outdoor tables beckon everywhere you wander, from the train station to the Opera House to the medieval Market Church, now a trendy food hall, on to Steinfer, the Red Light—er, entertainment—district. Hint: The hottest gay disco is Schule Sao, while Café Caldo, where “Nobody’s Left Cold,” proffers parties without limits. And don’t miss the city’s huge Pride parade.

Tomorrow meets yesteryear in the town’s cache of sky-piercing spired churches. Look closely, and you’ll spy an altarpiece by august painter Lucas Cranach that includes his pal, Martin Luther, in the crowd. Outside stands a mighty statue of the reformer, admonitory hand held high (and often outfitted with a stein of beer, courtesy of student pranksters).

I sipped a stein in his honor at the venerable Broyhan Haus, whose menu celebrates traditional dishes like schnitzel, suckling pig, and boar. But it was spring, and that means spargel season. The cherished white asparagus found its way to my plate in many yummy guises: a foamy mousse surrounded by shrimp and endive; a crisp salad dotted with strawberries and air-dried beef; a creamy soup; and the ultimate in eating, a pile of pale stalks accompanied by boiled potatoes and enough Hollandaise to bring on cardiac arrest.

But we were on a quest for castles. First stop, just south of town, was Marienberg, rising from the forest like Snow White’s (well, this is ground zero for the Brothers Grimm, after all). Built by King George in 1848 as a birthday present to his queen, its 140 rooms boast silk-covered walls, exquisite parquet floors, and fancy fireplaces in the then-trendy, uberlush Neo-Gothic style. The former stable now hosts a first-class restaurant, and the courtyard is the scene of concerts—classical to jazz. 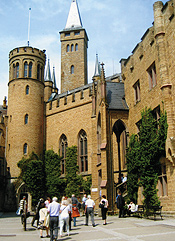 On to Coburg, where Victoria and Albert summered in Rosenau, a forested medieval castle converted into a rustic retreat—well, if “rustic” is quite the right word for an abode complete with gold-crusted concert hall.

When the royals opted to stay in town, it was at Ehrenberg, circa 1543, remodeled, as was every castle worth its spire, in the Neo-Gothic look of more-is-more, including a Hall of Giants, where dozens of guys with bulging marble muscles uphold a busy Baroque ceiling.

Atop a nearby hill looms Veste, a castle-fortress where once its duke harbored Luther when he topped the Catholic Church’s Most Wanted List. Tour his rooms, view Cranach’s portrait of the reformer, then cruise the gift shop for socks and mugs that also bear his likeness.

Relax, back in Coburg, on its movie-set Town Square, munching bratwurst smoked over pinecones, as the town’s fife and drum corps performs. Kids chase dogs, dogs chase balls, and we chased ice cream, as in the favorite local sundae, spaghetti eis: ice cream piped into a tangle à la spaghetti, topped with strawberry sauce. (I guess you had to have been there.)

This town boasts something for everyone: a chapel where Johann Strauss got married; teddy bear and Hummel factories; and a Samba festival. Also, St. Moritz Cathedral, honoring the Black Moor saint, its portal guarded by the Virgin Mary trying her best to corral her squirming infant, facing Adam and Eve smiling guiltily over their apples.

Bayreuth, up next, is the apex where art, architecture, music—and spargel!—ebulliently intertwine. Richard Wagner rules the music scene, as even his in-law, Franz Liszt, admitted. Both composers’ homes are open to visitors. The famous Festspielhaus, designed by Wagner himself and home to summer’s festival, marks the first time that, instead of artists coming to kings, kings came to artists. (But don’t expect to join them—tickets sell out 10 years in advance.)

Instead, visit the town’s Margravial Opera House, the crown jewel of the ruler’s wife, Wilhelmina, sister of Frederick the Great and intimate of Voltaire, a frequent visitor. The talented woman not only designed the gilded Rococo hall, called “the most beautiful opera house in the entire world” (no arguments from me), but also played and acted on its stage.

Her paintings decorate the walls of the nearby New Palace, also of her design, in the then-shocking style of small, intimate rooms of beauty rather than grandiose salons: the Music Room; the Palm Room, with its dragon ceiling; and the Broken Chinese Mirror Room, whose million bits of mirrors mirror the woman’s own tortured soul.

The marvelous Wilhelmina was as well the mind behind the Ermitage, a retreat from the excesses of city life, with cells to play monk-for-a-day not far from the palace’s ornate facade and the Orangerie garden, with a lovely restaurant (asparagus soup followed by more spargel, glistening with rich Hollandaise). Then, to get away from getting away, she designed the Sanspareuil Rock Garden and petite palace fitted out with Chinoiserie for the ladies and stags’ horns for the gents. The royals loved it for its romantically weird rock formations. I loved it for the café’s spaghetti eis.

Regensburg’s heyday was in the Middle Ages. But then, its economy turned sour—bad for them, but good for us, for no one could afford to make those fashionable Neo-Gothic “improvements.” Thus, save for war damage, its buildings stand just as they did in medieval times. Scores of blunt Romanesque watchtowers rise from even earlier Roman arches. A masterful stone bridge spans the Danube, as it has for a thousand years.

Inside the grand cathedral, a leering Devil and his Grandmother (who knew?) warn off sinners. In the vicinity lies a vibrant university, where Pope Benedict XVI, Regensburg’s favorite son, once taught. True, its ancient synagogue was demolished in the dark days of World War II, but a sculpted memorial stands on its former footprint. Nearby, a plaque indicates where Oskar Schindler once lived.

Regensburg’s castle, smack in the heart of town, is occupied by one of Germany’s wealthiest couples, but you’re free to tour it. Thurn und Taxis sports 500 rooms and 14 staircases, the biggest residential palace in the land. Talk about what money can buy: precious tapestries, chandeliers of Murrano glass, a conservatory paved in rare Delft tiles. A throne room. A ballroom. The Silver Room. The glinting golden chapel.

But man—or at least, this visitor—cannot live by curlicues alone: Bring on the spargel! At old-time Weisbrauhaus, known for its house brews, the menu is a salute to German classics: rouladen, pigs knuckles, sauerkraut, and sauerbraten. And spargel.

Soldiering on to Starzach, we not only toured another castle, but also slept in one: Schloss Weitenburg. Its owner, a “confirmed bachelor,” as they say, scours Sotheby’s auctions for antiques to dress guest rooms, with their drop-dead view of the valley.

Best for last—or at least, most famous. Nearby loomed our final castle, the renowned Burg Hohenzollern, whose family tree, painted on the wall, is a who’s who of emperors, from Fred the Great to Kaiser Willy. Tour its treasury to view the golden crown of Prussian rulers, showcasing a sapphire big as a Ping Pong ball.

But normal folks like us can dine here, too, on old-fashioned favorites like spaetzle with cheese and onions, and maultschen—like giant, meat-filled ravioli. One more bite, and the airlines will charge me for excess baggage.