At home, it’s milk and Wheaties, Breakfast of Champions. Here, it’s grits and gravy, breakfast of Macon. I think I’ll move to Georgia. 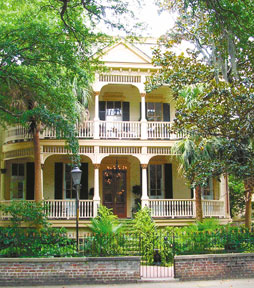 In his rush to torch Atlanta, Sherman bypassed Macon, which only shows that whatever his reputation as a general, his culinary judgment was decidedly subpar. Lucky for us, he left the entire city standing, sparing every last way-beyond-gorgeous Antebellum mansion—a mixed marriage of Greek Revival, Italianate, Federal, and Victorian belles for us to ogle, tour, or even lay our head upon a pillow (Oprah did) at the 1842 Inn, where I played Miss Scarlett for a moment, sipping a mint julep on the porch.

While bourbon’s fine, grits are even better, so take a moment to step out of your hoop skirt and into denims for supper at the Fish N’ Pig, a down-home roadhouse where the list of adult beverages bear animal names like Terrapin beer and Tiger Mountain cabernet, and the hors d’oeuvre of choice is bald peanuts. Well, that was a Northerner’s misunderstanding. Turned out to be boiled peanuts, if you pronounce the venerated snack the Yankee way. 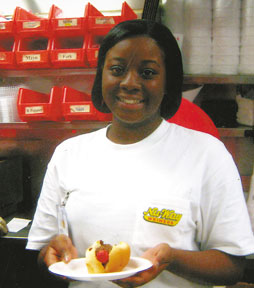 The menu celebrates countrified fixin’s like pulled pork, fried catfish, fried alligator (tastes like chicken), and fried chicken (tastes like alligator), served with a choice—here’s the important part—of sides, leading off with grits. Grits! Love at first swallow. Follow them up with an order of hush puppies, and you’ll blend right in.

Back downtown, folks in the know head for Jeneane’s, where “meat and three” sells for $6.95: that’s catfish, Southern fried chicken, meatloaf or brisket, along with trios of side dishes, including black-eyed peas, collard greens, creamy coleslaw, butter beans, field peas, and mashed turnips—plus biscuits light as hot-air balloons or cornbread, prepared flapjack-style. Follow up (yes, you can) with pecan pie, chess pie, or coconut pie—$1.25 a slice. I couldn’t pass up the poster’s promise—“Southern cooking makes you look good”—so I came back twice.

Next, following the Oprah trail, I grabbed the stool she perched on at Nu-Way Weiners (flagrantly spelled wrong in neon for decades), a Macon tradition where the thing to order is a hot dog “all the way”—smothered in chili. 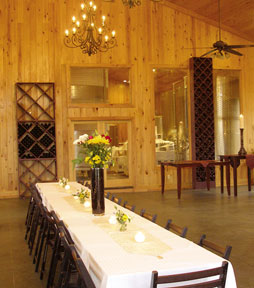 It was cherry blossom time in Macon, celebrated by a festival where the firemen cooked cherry-pink pancakes, and folks lined up for pink ice cream. Fare like that convinced British chef Paul Harpin to stick around. Lured here to cook fine European cuisine, he started out at Harpin’s treading the culinary straight and narrow, but soon strayed from the path in favor of fine-tuning Southern staples. Come to him for Low Country picnic food like baked beans infused with cloves, skin-on potato salad, eggs elegantly devilled with chives, pound cake, and all the sweet tea you can manage—plus crisp fried chicken.

“Frying is not simply a culinary technique—it’s a religion. My mother even chicken-fried lard,” a local wit informed. As that old-timer told me, “Here, you get up in the morning, and fry a chicken, so’s you’re not caught without an offering in case somebody dies.” Chicken, grits, and biscuits: the Low Country trinity.

This is not to say Macon doesn’t know how to party. Put on your steppin’-out duds, and head to the Tic Toc Club, where they take Southern cooking up a notch or three. Back in the day, Little Richard, a native for whom a boulevard is named, got his start here. At 15, when he finished his shift at the nearby Trailways Station, he’d head over to perform. The Tic Toc was (still is) a melting pot where blacks and whites, gays and straights could mingle. Today, the chef keeps ’em coming back for more of his smoked chicken ravioli with andouille sausage in picante tomato cream, and belt-busting osso buco saddling saffron risotto.

Couldn’t cross color lines to hear music at the Cox Theater back then, so the town’s first black millionaire built an equally grand performing house, the Douglass, where black locals, like Otis Redding and James Brown, got their starts. Check out their songs and stories in the Georgia Music Hall of Fame.

Hate to eat and run, but it’s on to Savannah, where Darin Sehnert, a Nebraska boy who cooked his way from Disneyland to London before discovering his true love in Savannah—Grits! Biscuits! Red eye gravy!—teaches classes in Low Country cuisine…er, cooking. His offerings celebrate ingredients close to hand in these parts: flounder, grouper, shrimp, and crab; pork and poultry (no grazing land for cattle). Plus the staples the slaves from Africa ate for supper, such as blackeyed peas, watermelon, okra, and the throwaway parts of a pig (neck bones, chitlins, trotters (while their masters ate “high on the hog”), along with the turnips and rice tilled on the plantation. Grits from corn. Quick breads in place of yeast loaves. Long-simmering, one-pot meals.

Sehnert, the born-again Southerner, teaches that homely fare in hands-on classes at The Mansion on Forsythe, so if you know what’s good for you, tie on an apron, and start peeling shrimp. Learn how to prepare red eye gravy (coffee is the secret ingredient) and angel food cake smothered in pecan praline, along with fried green tomatoes, black-eyed pea salad, shrimp, and grits and biscuits that require a paperweight—all made simple. Walk out with a Buddha belly and recipes to wow the folks at home.

On your way to Savannah, you’ll spot Shannon Winery in tiny Sylvania. Definitely do not pass Go until you’ve dined on Chef Ricardo Garpar’s skillful pairings of the winery’s red and whites from the local muscadine grape in his weekend dinners, where his grits go uptown with the addition of smooth olive oil. Not far distant in Statesboro, the 199 Chop House, whose chef hails from a Ritz-Carleton, gussies his own grits with smoked tomatoes.

If grits are your passion (and if not, consider therapy), call on Vinnie Overstreet, proprietor of Gopher Plantation, a 9,000-acre hunting compound in the middle of nowhere (actually, Millwood), where that sublime dish stars in the breakfast lineup prepared by his wife, Miss Sandy. Dinner consists of succulent hunting trophies like bear stew, wild duck pilaf, dove casserole, rabbit pot pie, wild turkey, and crispy quail, followed by Miss Sandy’s mile-high red velvet cake, peach cobbler, and coconut pie. Bonus is, you get to hike to a cabin, and sleep it off overnight.

Head next to the mother lode in Louisville, where homey grits take on big-city airs at Proof, the artsy café of Hotel 21C, whose chef pairs osso buco with Parmesan grits for dinner, then stages a wake-up call with a grits-cake lobster Benedict, or simply a side of grits solo, light and fluffy as scrambled eggs. Nearby, the posh Seelbach Hotel upgrades its ultracreamy renditions with capriole goat cheese and Bourbon-poached pears—like eating dessert for breakfast—then restages the mixture at dinner as grits cakes, launching pad for a roulade of quail and country ham.

The kitchen at Maker’s Mark does the lobster thing, too, using smoked Gouda to flavor its grits cakes topped with tail meat, slaw, and aioli. Then, the going gets really good. The Maker’s version of shrimp and grits adds poblanos and white Cheddar to the creamy mix. Jack Frye’s, another hangout for the rich and famous (as the photos on its walls attest), cuts to the chase: apps of shrimp and grits deluxe with red-eye gravy, then those same addictive, full-bodied grits topped with spicy oysters. Just say yes.

When you order a side of grits at homey little North Side Café, they arrive so smooth and silky, you almost consider wearing them, but what a waste of a primo breakfast! Or, start your day at Wild Eggs, where the cook goes wild with his grits-of-the-day menu, adding such treats as bacon, wild mushrooms, and goat cheese to what’s already the best food on God’s green earth.