It began, as so many religious things do, with death. That is, the very first attributed to the terror attacks of 9/11/2001: the death of Father Mychal Judge.

The Catholic priest had been Chaplain of the New York Fire Department for nearly a decade. After the World Trade Center was hit by twin jetliners, he immediately made his way to Ground Zero to do what was needed.

And in that moment, the carnage did end for Judge. The South Tower collapsed, as if shorn by the winds of Babel. Its apocalyptic detritus closed the circle of his earthly existence in a lavish of concrete and steel, and crafted thunder. 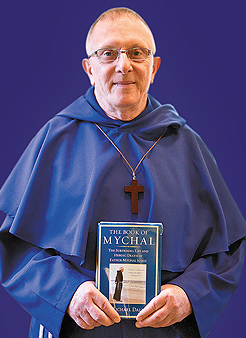 Harry Hartigan, an out Twin Cities-based admirer of Judge, says, “His whole life is truly the life of a Christian. He was the first Catholic priest to work with AIDS patients. He worked with the homeless, and, of course, the firemen. He had done everything.”

Perhaps one reason for that level of accomplishment was an early start. The future Father Judge joined the Franciscan Order of Friars Minor before his 16th birthday. Despite the insular nature of this Catholic subcommunity—or perhaps because of it—he eventually would earn a reputation as a grand uniter.

Hartigan recounts, “He bridged gaps between gay and straight, and he brought it all into perspective.”

Though celibate, Judge privately acknowledged to friends that, in fact, he was a gay man trapped in an abstinent body.

Hartigan devoted an early part of his own life to formal piety, but didn’t connect in the same way as Judge did.

As Hartigan recalls, “I entered a religious order when I was, like, 18 or 19, I guess. I entered the Christian Brothers, and I left because there was an issue with another one of my classmates. They asked him to leave because they assumed he was gay. So, I said, ‘If he’s not good enough, then I’m not good enough.’”

Along with two other devotees, Hartigan resolved to turn that gendercentric stigmata into a sectarian stimulus, whipping devotion into a specific shape: the Gay Order of Mychal (GOM).

Hartigan testifies, “We decided to open the door, and come out of the closet, because most of the work that’s done for religious orders is done by gay people.”

In current Catholic religious orders, Hartigan explains, “You can be gay, as long as you maintain celibacy, and you follow what the Vatican says. You can be in an order, but you must hide who you are. It’s time to stop that. We [GLBT folk] need to have the credit for what we do.”

Like their patron, GOM members minister through good deeds, not mere words.

Hartigan maintains, “We’re not preaching anything to anybody. The Order is not connected with any church. It’s totally separated, totally independent.”

While GOM owes some of its structure to more orthodox lineages, it embodies an important break from their always-paternal, often-patronizing pecking orders.

Hartigan points out, “The Gay Order basically is an order that doesn’t have a hierarchy. It’s managed by the consensus of the group. It’s looking at what you do, not who you are. We believe doing God’s work is the primary thing—to use the resources we’ve been given.”

GOM is, in fact, a confederacy of such resource-usings, with each member embodying a discrete ministry that connects to all the others.

Hartigan shares, “My ministry is working with kids. That’s something a little bit different. One of our founding members does a great deal of work with nursing home residents who don’t have visitors. That’s one of his ministries. If you come into the Order, and your ministry is, say, working with the homeless, we will support you in that. We’ll help you in any way we can. You’re not alone out there.”

Those ceremonious ministrations naturally begin with an initiation.

Hartigan relates, “We ask that people who want to come into the Order do a six-month journey of discovery. That means they take the time to work with other members of the Order to discover what it is they want to do, and if they really want to be there.”

The reason for such a trial hearkens back to that most basic and profound of reasons: the tick-tick-ticking of the cosmic clock.

Hartigan remarks, “Father Mychal Judge died on 9/11, and his death brought hope to countless people after the horrors of that day. Folks of different religious faiths and folks with no connect to religion came together on this day. Amazing! Death is one of those facts of life that folks really don’t want to think about or deal with until they are forced to. Death teaches us that the time we have to live and do what God has created us to do is very short.”